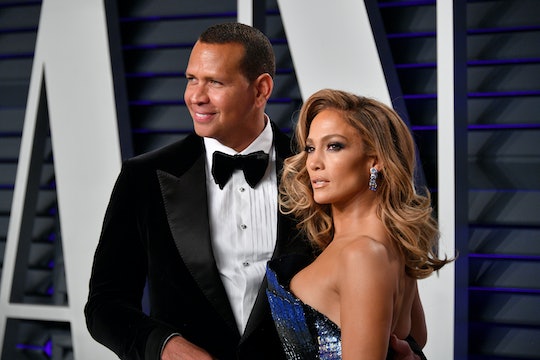 Jennifer Lopez and Alex Rodriguez's relationship is so sweet. You can tell that the newly engaged couple cares so deeply for each other and is willing to do anything for each other — like take each other's Instagram photos. In a new interview, Lopez revealed that Alex Rodriguez will be the ultimate Instagram husband when they're married and it's all kinds of adorable.

After dating for two years, according to Elle, the former baseball player decided to put a ring on J. Lo's finger earlier this month while they were on vacation. Anyone who has been paying attention to their relationship over the past two years knows that Rodriguez, an MLB analyst who retired from playing baseball in 2016, according to NBC News, is super supportive of his wife-to-be. He is always at an awards show taking iPhone photos of her or on a red carpet, appearing on the arm of the very busy singer and actress.

And in a new interview with People, Lopez revealed that he is so supportive of her, he has also become her Instagram photographer.

And Rodriguez told the magazine that he has no problem doing this, especially since he has an open schedule to fulfill the role.

Aren't they perfect together?

Rodriguez can now join the exclusive club filled with the many people who call themselves Instagram Husbands. The label is pretty ambiguous, according to The Atlantic. An "Instagram Husband" is a term for the person (gender non-exclusive) behind all of the incredible shots on one person's Instagram account. An Instagram Husband will go through lengths to get the perfect shot, knows their subject's favorite angles, and understands the importance of that good golden hour shot.

The most important thing about Instagram husbands is that they understand how to fulfill their partner and their dreams, which is exactly what Lopez says Rodriguez does.

"We're constantly supporting each other in our individual endeavors and then we're thinking about the things we can build together," Lopez told People. "He knows my dreams and I know his dreams, and together we feel like we're stronger. He is my biggest collaborator and biggest supporter."

Ahead of their marriage, the couple has already collaborated together for the first time on a line of men's and women's sunglasses for Quay Australia, according to Us Weekly. Talk about a power couple.

The couple has stated that their partnership works because they've both been in the spotlight for so long. Neither of them is afraid to step back for a moment and support one another because they don't always crave to be the center of attention anymore.

"Some people it wouldn't work — they can't stand not being the one in the spotlight," Lopez told Vanity Fair in 2017. "But not us."

Whether they're in front of the camera together on a red carpet or behind the camera, perfecting each other's Instagram feeds, the couple clearly knows the makings of a strong, loving relationship.