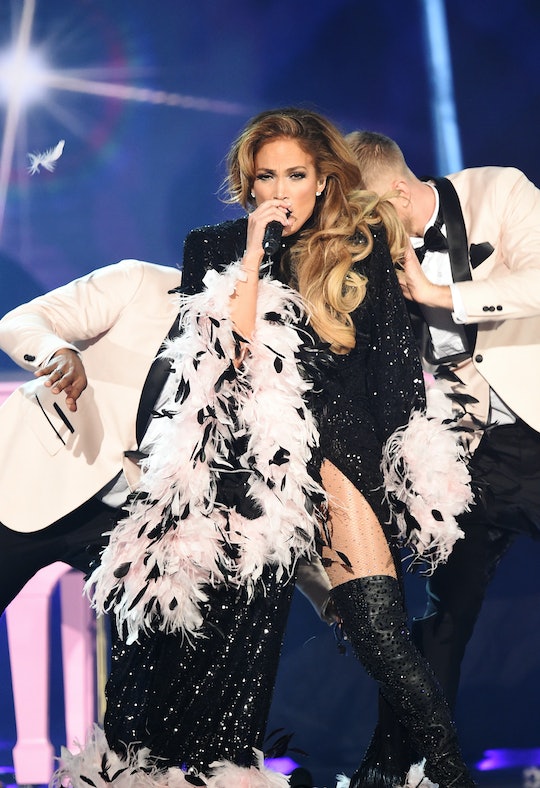 The Motown tribute at the 2019 Grammys featured the iconic J. Lo performing along with Ne-Yo and Smokey Robinson. And Alex Rodriguez's reaction to Jennifer Lopez's Grammys performance was a super adorable show of support for his love.

He was on hand at this past year's MTV Video Music Awards, as well, cheering J. Lo on as she accepted the Michael Jackson Video Vanguard Award, which came with its own knockout performance of all her greatest hits. But at the Grammys, she helmed a very different kind of performance.

Smokey Robinson and Grammys host Alicia Keys kicked things off with a little a capella duet of his 1969 classic "Tracks of My Tears" (popularized to millennials of a certain age by countless American Idol covers on Motown night). "Motown is a family that my best friend Berry Gordy brought together in Detroit 60 years ago, changing music forever," Robinson said in his introduction, teasing CBS' upcoming Motown retrospective.

Then Lopez, in a series of truly fantastic costumes, performed a medley of Martha and the Vandellas "Dancing in the Street," the Marvelettes "Please Mr. Postman," Barrett Strong's "Money (That's What I Want)," and The Contours "Do You Love Me" before introducing Robinson who sang "My Girl." She then picked up a duet with Keys singing "Papa Was a Rolling Stone," covered "Square Biz," and finished with a killer Latin dance combination that landed her atop Ne-Yo's piano. If you're exhausted just reading that, then check out the expression on Rodriguez's face watching his wife perform.

He blurted out a "wow!" after her big finish, which cameras happened to catch, and the standing ovation she received from the audience was equally enthusiastic. J. Lo thanked Robinson, Marvin Gaye, Ross, and the Supremes during the course of the performance, according to The Hollywood Reporter, and dedicated the tribute to her mother Lupe at the very end. In a red carpet interview with E! News, Lopez explained:

I'm super excited, humbled, that they asked me to do it. But you now, I want to dedicate this performance to my mom, because this is the music that we listened to in our living room. I had three sisters and so the three of us would like, be the Temptations, the Supremes, everybody. My mom, this was her music, and I grew up on it. This and musicals. I think that's why I'm the performer that I am today, is because of that music and that time and because of my mom. So I'm super excited. It's a dream come true.

He went on to say, "Motown was music for everybody. Everybody. That just says that Jennifer Lopez, growing up in her Hispanic neighborhood, loved Motown. How can we beat that? Who's stupid enough to protest Jennifer Lopez doing something for Motown?"

Unfortunately, there was a pretty vocal Twitter contingent who disagreed. The decision to give Lopez the tribute is debatable, for sure, but the quality of her performance was undeniable, and her man was obviously super proud.