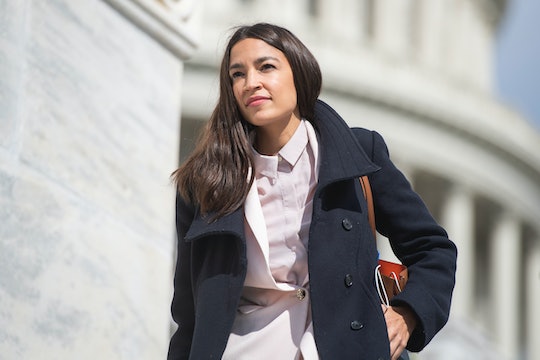 With COVID-19 cases still surging across the country, virtual reunions aren't uncommon. However, one congressional representative found herself in the midst of an unexpected virtual reunion when one of her teachers reached out to her on Twitter. Indeed Rep. Alexandria Ocasio-Cortez's teacher surprised her with an encouraging tweet, spurring the two to reconnect and reminisce over social media.

As Ocasio-Cortez prepared to speak at the now-virtual Democratic National Convention next week, she took to Twitter with a poem after reports surfaced that she'd have only 60 seconds to speak. "I only have a minute. Sixty seconds in it. Forced upon me, I did not choose it, but I know that I must use it. Give account if I abuse it. Suffer, if I lose it. Only a tiny little minute, but eternity is in it," Ocasio-Cortez tweeted, quoting a poem written by civil rights leader Dr. Benjamin E. Mays. As Ocasio-Cortez noted in her tweet, the poem was recited by the late Rep. Elijah Cummings during his first floor speech in Congress in 1996.

Nestled amongst the tens of thousands of comments to Ocasio-Cortez's tweet, however, was one from someone with a personal connection to the legislator. "You've got this," Twitter user @mjacobs324 wrote to the New York representative. "Remember all those poems we recited together in 2nd grade? It was prep for this moment. You've got this."

And while the rest of Twitter might have been scratching their heads at the commentator's identity, Ocasio-Cortez knew immediately who was behind the tweet. "Ms. Jacobs! Is that you?!" she tweeted in response. "Yes, I do remember the poems we recited in second grade! You prepared me perfectly for this moment. Thank you for teaching me, encouraging my growth, and believing in me as a child."

Ms. Jacob's Twitter bio identifies her as a "veteran elementary teacher" who is "uncertain about our future but inspired by former student @AOC." She later confirmed that yes, she was in fact Ocasio-Cortez's second grade teacher, Ms. Jacobs.

"Yes, yes!!! It's me! I'm here," she tweeted back. "You are my superhero! I want to give you a hug when hugs are safe again. Always always here for you."

The elementary educator later tweeted that her exchange with Ocasio-Cortez had come during a particularly rough day. "One of my lowest days this summer, worried about my teaching future. And then this," she wrote while retweeting her former student's thanks.