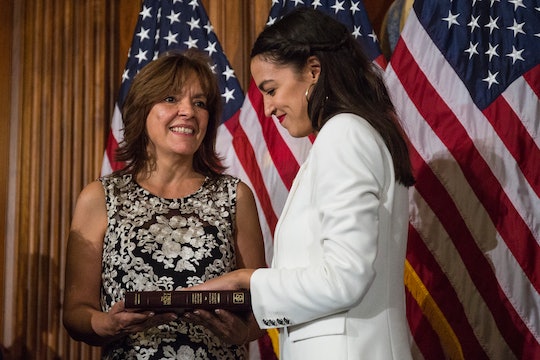 It can be hard to keep track of politics without getting emotional, but this is a story that will finally prompt some happy tears. Alexandria Ocasio-Cortez's message to her mom honors single moms everywhere. Let's be real, single moms don't always get enough credit. Not only is this a sweet moment, but it also helps remind the public about those who helped shape some of the politicians that are making history today.

On Jan. 3, 2019, Ocasio-Cortez made history as the youngest woman to ever be sworn into Congress. The 29-year-old represents New York's 14th congressional district, as reported by Biography, a role she earned after defeating 10-term congressman Joe Crowley in the June primary and then winning the general race in November. New York's 14th district includes both the Bronx and Queens, as reported by Refinery29.

So far, Ocasio-Cortez has made quite the wave in politics. For her swearing in ceremony, she wore all white in honor of the suffragists who preceded her. She also made sure to wear hoops and red lipstick, revealing in a tweet that her decision was, "inspired by Sonia Sotomayor, who was advised to wear neutral-colored nail polish to her confirmation hearings to avoid scrutiny. She kept her red," as Allure reported.

Now, Ocasio-Cortez has taken the time to shout out one of the most important people in her life.

Early Sunday morning, Ocasio-Cortez posted an emotional tribute to her mother on Twitter and Instagram. The picture shows a photo of Ocasio-Cortez, House Speaker Nancy Pelosi, and her mother during the swearing in ceremony.

"What can I possibly say except thank you? So many people sacrificed so much for this to happen ― my mother most of all," Ocasio-Cortez began in her caption.

She went on to note her mother's own story. Ocasio-Cortez's mother was born in Puerto Rico and didn't have much money growing up, as reported by Refinery29. She later moved to New York City with her husband, who she met while he was in Puerto Rico visiting family, but she did so without knowing any English, as HuffPost added. The couple had to essentially start over after her mom moved to New York, Ocasio-Cortez said.

Later, her father died of cancer and her mother became a single mother. The family again had to start over.

"It wasn’t long ago that we felt our lives were over; that there were only so many do-overs until it was just too late, or too much to take, or we were too spiritually spent," Ocasio-Cortez continued. "I honestly thought as a 28 year old waitress I was too late; that the train of my fulfilled potential had left the station."

But of course, it wasn't, with Ocasio-Cortez going on to add:

This week I was sworn in as the youngest woman in American history to serve in the United States Congress. I hope that record is broken again soon. As I raised my hand for the oath, my mother held the holy book & looked into @SpeakerPelosi’s eyes. Afterwards, the Speaker said to her 'you must be so proud,' and my mother began to cry.

This incredibly heartfelt noted touched the hearts of many reading. People were quick to leave comments underneath Ocasio-Cortez's Instagram post.

"Brought me to tears, so moving. Really just makes me wanna get back on the horse because anything is possible. Si se puede," one user wrote.

Ocasio-Cortez went on to thank everybody who contributed to her campaign, writing, "Thank you all. Whether it was late nights, hard days, pocket change, emotional investment, hard & soft skills, door knocking in the heat or petitioning in the bitter cold — we did this together."

This young congresswoman is clearly going to make quite the impact in politics. It's going to be interesting watching her through the years and seeing what happens next. But no matter what, it seems pretty clear that she and her mom will be side by side.