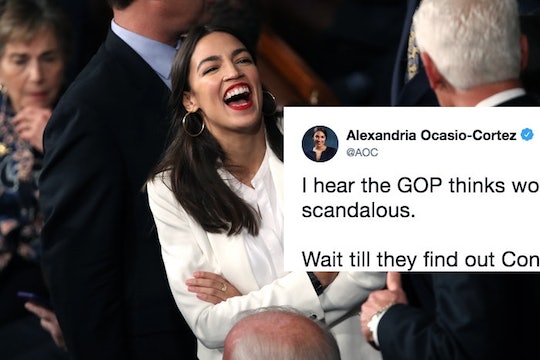 On Thursday, New York Rep. Alexandria Ocasio-Cortez was sworn in as the youngest ever congresswoman, but as usual, her critics were wasting no time finding yet another way to try and bring her down. Earlier in the week, a Twitter user named AnonymousQ shared a video clip from Ocasio-Cortez's college years showing her dancing on the roof of a building, and called her "America’s favorite commie know-it-all acting like [a] clueless nitwit," according to CNN. The video was taken out of context from a longer video, and was clearly meant to embarrass her, but Ocasio-Cortez's response to being shamed for dancing in college was pretty much about as perfect as you'd expect it to be.

In a tweet of her own on Thursday, Ocasio-Cortez expertly hit back at the online troll with a new video clip of herself dancing to Edwin Starr's "War" — this time outside her congressional office, complete with her name placard and an American flag right by the door.

And in case that didn't send a clear enough message, she wrote: "I hear the GOP thinks women dancing are scandalous. Wait till they find out Congresswomen dance too! Have a great weekend everyone."

As perfect as Ocasio-Cortez's response was though, she definitely didn't have to worry about needing to defend herself. In fact, much to the chagrin of online trolls everywhere, it's quite possible that footage of the politician dancing only made her more popular than she already was.

Even before the full 2010 mashup video from Boston University's Howard Thurman Center was properly identified and placed in context (it was actually inspired by this 2009 mashup, which set scenes from Brat Pack movies to "Lisztomania" by Phoenix, and which had been replicated many times), countless Twitter users offered up their support for the congresswoman — who, it turned out, had not only appeared in the clip, but helped produce it as well.

In fact, almost immediately, a new Twitter account called AOC Dances To Every Song popped up dedicating itself to publishing new video clips of, well, AOC dancing to every song. And though it didn't even seem possible, the edits just make Ocasio-Cortez look even more fun and awesome than she already did:

It also didn't take long for others to note the massive hypocrisy involved in criticizing Ocasio-Cortez for something as benign as dancing in a college mashup video with other students, given the many completely-outrageous and legitimately concerning moments that have occurred in politics as of late:

And though Ocasio-Cortez had already made her position perfectly clear with her latest tweet, she also explained to The Hill's Olivia Beavers that she definitely didn't have any qualms about the video making its way around social media.

Beavers tweeted that when she asked the congresswoman about it, she replied, "It is not normal for elected officials to have a reputation for dancing well and I'm happy to be one," and added, "It is unsurprising to me that Republicans would think having fun should be disqualifying or illegal."

It's definitely not the first time though that Ocasio-Cortez has had to fire back at her critics — in fact, it's not even the first time this week. On Thursday, she was booed as she cast her vote for Nancy Pelosi as House speaker, according to The Washington Post, but it definitely didn't seem to get her down. In a tweet, she shared a video clip of the moment, and wrote, "Over 200 members voted for Nancy Pelosi today, yet the GOP only booed one: me. Don’t hate me cause you ain’t me, fellas."

In other words? Ocasio-Cortez may have her work cut out for her thanks to the inordinate number of people who seem dedicated to seeing her fail, but not only is she capable of withstanding the criticism, she's absolutely ready to shake it right off. And anyone who thought they could derail her with a completely charming video clearly has to rethink their strategy.