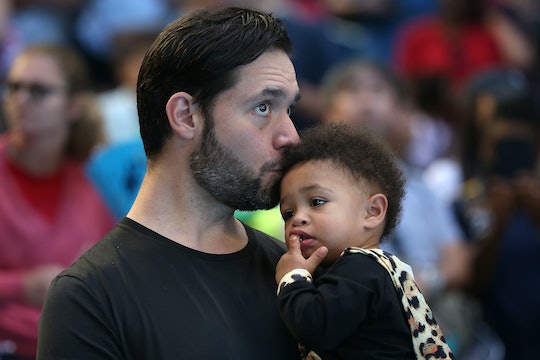 Co-founder of Reddit Alexis Ohanian knows a thing or two about the importance of paternity leave. That's because he was lucky enough to be able to take advantage of 16 weeks of leave after his daughter was born. Thankfully, the company he co-founded offered this precious, compensated time so he had the opportunity to bond with his baby girl, but he was able to care for his wife, tennis pro Serena Willams. And Alexis Ohanian thinks the paternity leave he was able to have should be made available to all families, as he explained in a powerful op-ed for NYT Parenting.

As a refresher, Ohanian and Williams welcomed their first child in September 2017, Alexis Olympia Ohanian Jr. Not much else was known about the delivery or Williams' recovery at the time. But in January 2018, during an interview with Vogue, the 23-time Grand Slam winner shared her terrifying post-childbirth experience, which included an emergency C-section. That's when Williams revealed she had suffered from a pulmonary embolism, which in turn led to her C-section incision coming open from the coughing. Then, as she detailed, when doctors were repairing the incision, they discovered that a large hematoma had flooded her abdomen. Things were definitely scary for a few days. But ultimately, Williams pulled through and was able to go home with her family.

As Ohanian revealed in a recent op-ed for NYT Parenting, it was a long recovery for Williams after her health scare. And the Reddit co-founder is so thankful he was able to be there for her and their baby girl. "When we came home with our baby girl, Serena had a hole in her abdomen that needed bandage changes daily. She was on medication. She couldn’t walk," he wrote in a piece published on Monday, Aug. 12. "Nothing could have dragged me away from my wife and daughter in those hours, days and weeks — and I’m grateful that I was never forced to choose between my family and my job."

Ohanian went on to share some depressing statistics about parental leave in the United States. Like the fact that nearly one in four employed women return to work within two weeks of giving birth, as In These Times previously reported. Or that a mere 9 percent of employers in the United States offer paid paternity leave to all employees, according to The National Partnership for Women & Families. And a whopping 76 percent of dads resume working within one week after welcoming a child, according to research from the Boston College Center for Work & Family.

"All people deserve fulfilling work and close family ties," Ohanian wrote. "No dad should feel forced to wholly prioritize work over family at a time as important as the arrival of a new baby — a time that is not only critical in the beginning, but has far-reaching impact years down the line."

Finally, Ohanian addressed the elephant in the room: that the United States is the only developed country that doesn't require paid parental leave following the birth or adoption of a child. The father of Alexis Olympia — who will be turning 2 next month — ended his op-ed by calling for a federal bill mandating "quality paid family leave for everyone." This includes birth parents, adoptive parents, and caregivers.

"Until that happens, dads, let me be your air cover," Ohanian wrote in the op-ed. "I took my full 16 weeks and I’m still ambitious and care about my career. Talk to your bosses and tell them I sent you."

As a mom of four, I wholeheartedly agree with everything Ohanian has written. My husband returned to work just one week after each of our four children were born — and he had to use sick days to do it. I was able to use a combination of sick and personal days with my first two babies, along with partially-paid six weeks of leave. Which is better than nothing, yes, but it's still depressingly lacking compared to most other countries around the world.

Kudos to Ohanian for using his platform and influence to shed light on this important issue. Hopefully, by the time my children are starting families of their own, paid family leave will be guaranteed for everyone.