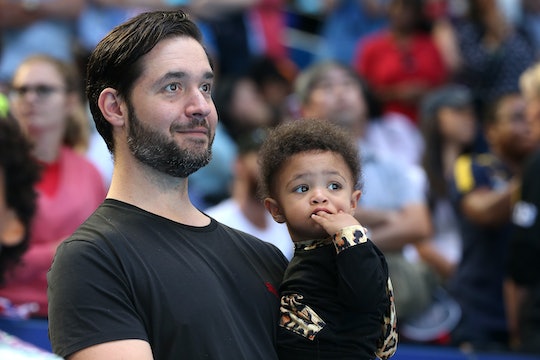 When Serena Williams gave birth to her daughter, Alexis Olympia Ohanian Jr., both she and her husband, Alexis Ohanian, were able to take time off work during those irreplaceable days. But not everyone has that privilege, and the proud dad is aware of that. So, Alexis Ohanian's paternity leave fund is meant to help new dads who don't have the ability to do so.

After Williams gave birth to Olympia on Sept. 1 2017, according to The Sun, she took a break from her tennis career to recover and take care of her daughter. This "leave" from tennis was absolutely necessary; her body was recovering from pregnancy and the scary complications that she suffered from her C-section, according to CNN. But Ohanian was able to be by her side and be with his newborn, thanks to his paternity leave. "Being able to develop that connection to the little one, but then also to my partner, my wife, was so valuable," Ohanian told CNN last year.

Ohanian, the co-founder of capital firm Initialized Capital and internet forum Reddit, was able to take 16 weeks of paid leave, according to Forbes, and wants to give other parents the same opportunity.

With the help of Dove Men+Care and a $1 million paternity leave fund, Ohanian explained during a recently appearance on TODAY that he wants others to look to him as an example and encourage "executives and everywhere down the company ladder to say 'I can take this time off, too.'"

During the same appearance on TODAY, Ohanian went on to explain:

It's something that is so important because it does give cover to the women in our organizations to take maternity leave, as well. Because if men are taking advantage of these policies, and very few even get the chance to, it sets a standard for businesses, for society, and it's important.

Now, expectant fathers or new fathers in the United States can benefit from Dove Men+Care wanting to set such a gracious example for families and new moms in need. Ohanian told TODAY, that Dove Men+Care is offering $5,000 grants to these dads in a new campaign that was announced this week.

All they have to do is go to this website and sign the Pledge for Paternity Leave, which shows that they are committed to their families first, then their jobs. Once they've done that, they can apply for the Paternity Leave Fund, which asks important questions about fatherhood and their plans for paternity leave.

Once that is filled out, it is up to Dove Men+Care to determine who will receive these grants. But with or without the grant in hand, there is so much that new parents and even companies can take away from this awesome commitment. Especially since the law in the United States isn't too forgiving to new parents, according to Forbes.

"I had no idea the United States was such an outlier," Ohanian told Forbes in July 2018.

Indeed, there is no law in the United States that guarantees paid family leave, according to The Cut. Under the Family Medical and Leave Act, women can take up to 12 weeks after giving birth or adopting — it simply guarantees that you can't be penalized for taking time off — and it doesn't even protect everyone. Families can learn more about FMLA at the Department of Labors website, to see if they are protected under the law.

While company policies (and certain states, according to Esquire) may differ from this law and be a little more beneficial than just the basics, it's still pretty upsetting. Especially since there is a massive public want for paid family leave. A 2017 Pew Research Center Survey found that 82 percent of Americans think mothers should have paid maternity leave and 69 percent believe fathers should have paid paternity leave, according to USA Today. But, the nation isn't there yet, according to CNN, even though lawmakers are often drafting legislation to allow paid time off for new mothers and fathers.

But companies like Dove are certainly setting an example to show that paid family leave should be a necessity, not a luxury, all parents can use.