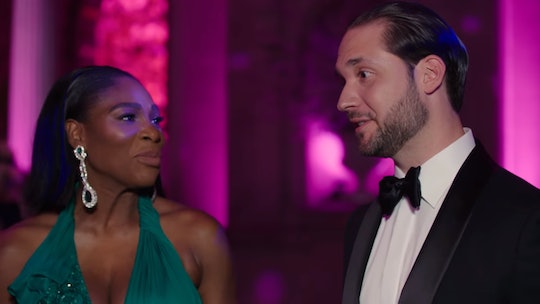 You've Got To See Alexis Ohanian's Video Tribute To His Daughter

It's been almost two weeks since the Most Important Celebrity Baby This Month was born, and now a video about Alexis Ohanian and Serena Williams' daughter will have you crying all the happy tears. Ohanian created a Snapchat-style tribute chronicling his fiancée's pregnancy, and honestly, it will probably leave every parent full of regret that they didn't think to do the same thing. This is a seriously devoted dad, you guys. Not only does the video stay true to his internet entrepreneur roots, it's so much more personal and meaningful than the standard baby book that other parents (attempt to) fill out.

The video montage begins with what appears to be Williams' first ultrasound confirming the pregnancy, and it features several vignettes with Ohanian addressing the baby directly: "You're a blueberry right now," he narrates in one scene, in a reference to those ubiquitous week-by-week baby size fruit comparisons most parents will probably remember. Another clip, captioned "No one knows I'm 8 weeks pregnant," features Williams kissing her Australian Open trophy and referring to it as her "baby." It's an absolutely masterful use of misdirection, but it will also be very cool when her real baby sees it and realizes that trophy kind of belongs to her, too.

The proud parents both shared the video on multiple platforms Wednesday morning, as well as the first photos of the baby, and (drumroll, please) her name: Alexis Olympia Ohanian Jr. She's not a true junior, since she has a different middle name than her dad, but we'll let that slide, because honestly, it's super cute. It appears as though her parents intend to call her by her middle name, based on the Instagram account they created for her, which they both low-key promoted by tagging her sweet little face in their own pictures and videos.

According to local West Palm Beach station CBS12, Williams first checked into St. Mary's Medical Center on Aug. 30, was induced the next day, and finally gave birth on Sept. 1. The baby's birth was later confirmed by her aunt Venus during an ESPN interview at the U.S. Open. At the end of Ohanian's video, Williams said that she stayed in the hospital for six or seven days, and there were "a lot of complications," but didn't go into detail. The clip closes with the baby's official stats: 6 pounds, 14 ounces, and one Grand Slam title. Only 12 days old, and she's already making the rest of us look bad.