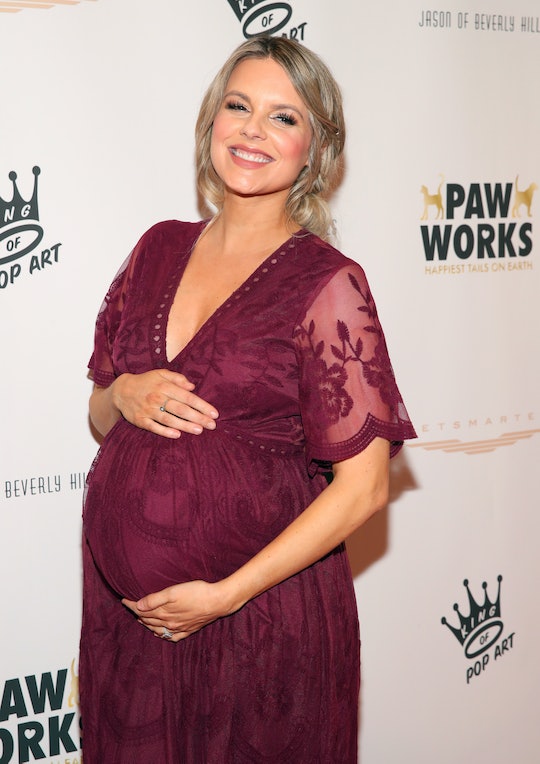 Ali Fedotowsky Opened Up About Her Labor With Baby No. 2 & Moms-To-Be, Take Note

In case you missed the big news, Ali Fedotowsky-Manno and her husband, Kevin Manno, are officially parents of two! The former Bachelorette couple already had a nearly-2-year-old daughter together, and as of Thursday they've added a little boy to their family. Following her second delivery, the blogger/mom has already gone on-record about her expectations versus reality when it came to birthing her son. In fact, Ali Fedotowsky opened up about her labor with her second child, and expectant moms should definitely take note.

Fedotowsky-Manno delivered her second child during the early hours of Thursday — at 12:57 a.m., to be precise, People reported. The newborn will join his older sister, Molly, 22 months. Not long after her son's delivery, Fedotowsky-Manno took to Instagram to announce his arrival, also sharing a sweet hospital photo.

"Our sweet boy has arrived!” the new mom of two captioned the snap, also noting he weighed 8 pounds, 11 ounces, and was 21.5 inches long. "We are so grateful and bursting with love!" It seems both the new parents kept their Instagram followers updated on the progress of labor via Stories. “Been here 17 hours. Hanging in there but exhausted,” she wrote with a video of herself and Kevin at the hospital, People reported.

Fedotowsky-Manno also opened up to Us Weekly about her longer-than-anticipated labor. “I sort of expected my second delivery to be a piece of cake,” she told the publication on Thursday. “Boy was I wrong!” The newly-minted mom added that she forgot about the pain once she saw her baby boy's face.

It was all completely worth it. He’s such a sweetheart. Nothing can ever compare to the moment you first lay eyes on your baby.

Happy and sentimental emotions about a mother meeting her baby for the first time aside ... It's completely understandable that Fedotowsky-Manno thought her second labor/delivery would be over quickly. That's because she's actually the exception to the rule. After vaginally delivering her first baby, a woman's subsequent labors typically do tend to be shorter and easier, according to WhatToExpect.com.

"There are no sure things when it comes to babies (and deliveries), but on average second babies do pop out a little faster, all things being equal (which they aren't always)," Heidi Murkoff, the bestselling author of What To Expect When You're Expecting, wrote. "Our body is more experienced the second time around — and certain parts are, well, let's just say, a little laxer, allowing for a potentially faster passage and speedier process."

With that said, this is merely a trend — and not a guarantee. "Second labors are usually easier, faster and more suited to a birth plan than a first," a labor nurse named Jeanne wrote for Fit Pregnancy. "This is, of course, a generalization but one that is pretty consistent." She continued:

Second babies are easier to deliver than first babies. Why? Lots of reasons: Our uteruses get smarter and figure out how to do the job. All the muscles, tissues and bones have already stretched out making it easier for the baby to descend. The trail has already been blazed and is easier to travel than one you have to create from scratch.

When I was expecting my first child, I went into the birthing process with a fairly open mind. I knew that no matter what my "birth plan" was, the actual experience could be completely different. One thing I did count on, though, was that the whole pushing-a-tiny-human-out-of-my-body business would take time. (I was correct, for the record; I labored at the hospital for what seemed like an eternity.) For round two (like Fedotowsky-Manno), I expected round two of the birthing process to be significantly quicker — because that's what all of the literature told me, after all. Unlike the former Bachelorette, though, it actually was shorter. It took only about five hours of my laboring at the hospital before our second-born arrived — and not more than 17.

So yeah. If you're expecting your second child, let Fedotowsky-Manno's experience serve as a heads-up. Because even though subsequent deliveries are supposed to be a piece of cake in comparison to your first baby, you could very well be the exception to the rule.