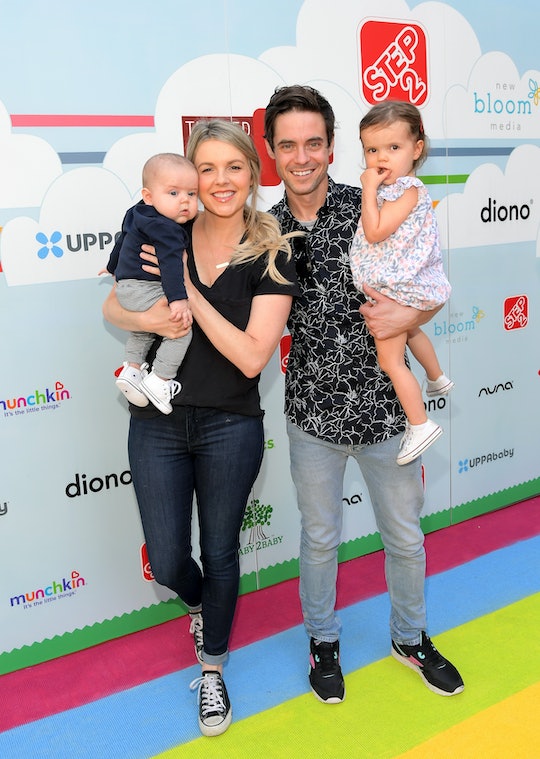 Seeing your child ill is one of the most painful experiences that a parent can go through. Keeping your spirits up while someone you care about is suffering can be tough, but it's an important part of supporting them. To that effect, Ali Fedotowsky-Manno shared a sweet update on how her son is doing after being on oxygen for breathing troubles. Despite his health issues, mama said her little Riley is "sooo chill."

Fedotowsky-Manno recently revealed that her 6-month-old Riley Doran has been under the weather. The mother-of-two told fans back in November that Riley had been receiving breathing treatments following a cold, as the Daily Mail reported. Both of her children, Riley and Molly Sullivan, 2, were sick at the time, she said. Riley was having quite a bit of trouble breathing and Molly had a fever for a few days.

Unfortunately, it looks like Riley is still having some respiratory issues. On Monday, Fedotowsky-Manno shared a video to her Instagram Story of her “brave little boy” that showed him on oxygen for a breathing treatment, laying in his mama's arms. “He’s sooo chill,” she wrote, according to People. It looks like Riley is getting the help that he needs and mom is hanging in there, too.

Been in Riley's nursery for an hour holding him will [sic] he sleeps. It's the only way he will nap with these breathing treatments. Going to ask the doctor about an alternative at his appointment on Tuesday.

Between Fedotowsky-Manno holding Riley while he naps, and Manno wearing him in a baby carrier, the little guy is getting plenty of comfort.

Back in November, Fedotowsky-Manno provided a bit of background into what was going on with her two children. “Both kids have been through a lot today. But this guy is smiling through it all. Lots of tests still to do on both kids. But they are hanging in there,” she said, according to the Daily Mail. “It’s been a crazy day already. We’ve been to the doctor’s office twice, once with each kiddo. The good news is that Riley’s breathing is getting much better! He’s still on the breathing treatments but he’s getting better. And Molly didn’t have a fever today.”

But as difficult as sleepless nights and numerous hospital visits can be for a mother and baby, family and fans alike can take comfort in the knowledge that he is receiving the care — and regular breathing treatments — that he needs to get well again. Here's hoping Riley feels better soon and sleep is had all around.