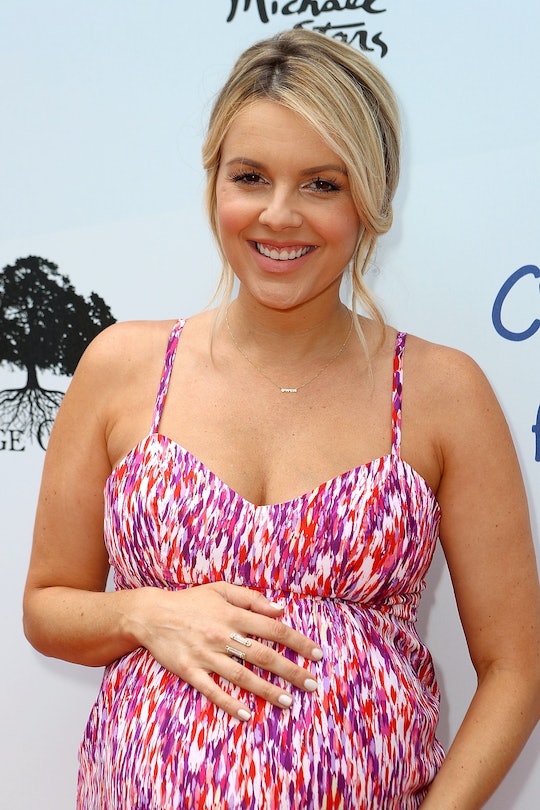 Ever since Ali Fedotowsky gave birth to her daughter Molly Manno in July 2016, she has been incredibly candid and open about her postpartum body. Fedotowsky has this amazing knack for telling it exactly like it is, which is why moms will appreciate Ali Fedotowsky talking about gaining weight after she stopped breastfeeding.

In an interview with Us Weekly, Fedotowsky got real about a common phenomenon — gaining weight after stopping breastfeeding. According to Women's Health, moms can "burn 300-500 calories a day," which explains why moms can experience weight gain once they're done breastfeeding. Per Fedotowsky's account, she put on a total of 10 pounds within two weeks once she stopped breastfeeding Molly. Fedotowsky told Us Weekly:

I stopped breastfeeding and gained 10 pounds within two weeks. I was eating so much, but I was burning it all up breastfeeding. And my hip problem started around the same time. So not only was I not walking or exercising, but I was done breastfeeding. So I just blew up.

Of course, weight gain is totally natural and OK, especially for a new parent. According to HealthDay, "nearly 75 percent of women are heavier a year after giving birth than they were before they became pregnant." So, just according to the stats, weight gain is a common post-pregnancy change, and moms who experience it are not alone and are not doing anything wrong.

In Fedotowsky's case, however, she's still trying to adjust to her new body and all of the changes. Ultimately, Fedotowsky just aspires to be "healthy," and she doesn't shy away from expressing her insecurities. Similarly to many moms, Fedotowsky has areas of her body that bother her — and she's not afraid to point them out. You've got to appreciate that level of honesty and openness, right?

I’m just trying to start watching what I’m eating a little more. I wish I could say I’m so healthy and go to the gym all the time, but I don’t. I’m very jiggly. I’m very jiggly under my clothes. At the end of the day, it’s about being healthy and I’m not healthy.

Fedotowsky's admission here is refreshing but also not representative of a body-positive perspective. Having a "jiggle" isn't something to be ashamed of or feel badly about, and for many people it's not a sign of poor health. Though only Fedotowsky and her doctor know what healthy means for her.

Regardless, it's brave of Fedotowsky to reveal her insecurities to the world, especially since many moms are often pressured to be perfect (whatever that means) in every single way.

As for how Fedotowsky intends to be healthier, look no further than Molly. Fedotowsky said she has discovered that exercising with Molly is one of the best (and most fun) ways to work out. Fedotowsky explained, according to her blog, Ali Luvs:

When I’m playing with Molly, I’ll toss her up in the air multiple times to help tone my arms. If she’s getting restless, I’ll dance around the house and jump up-and-down to be silly to keep her entertained. I know you guys are going to think that it’s not possible to get in great shape by doing these things, but I assure you it is! Every little bit counts!

At the end of the day, Fedotowsky's main focus is to treat her body better, which is a sentiment a lot of parents can probably relate to. Fedotowsky said, according to Us Weekly:

Giving birth made me realize how incredible a woman’s body is, so I want to treat mine better.

Yep, self-care is so important. No matter how you may feel about your post-pregnancy body, make it a point to take care of yourself, because your body deserves kindness.