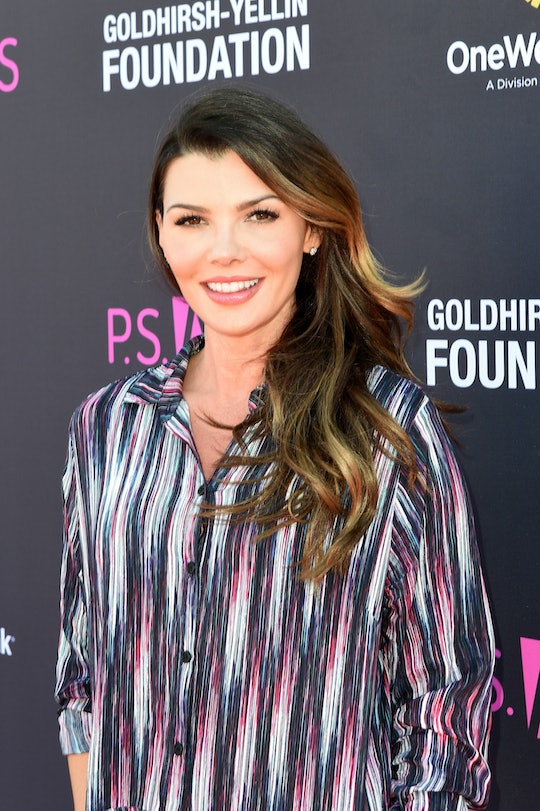 Ali Landry is an actress, an entrepreneur, and a passionate advocate for child safety, among other things. But she's also a wife and mom of three young kids. And while she's wanted to be a wife and mom for practically as long as she can remember, that doesn't mean that her ambitions, goals, and other passions aren't also important. I mean, the woman started several businesses and a safety initiative while pregnant. Talk about going after what you want. And Ali Landry wants you to have a community of women that inspire you so that you, too, can achieve whatever it is that's important to you. After all, very few of us do much alone.

The keynote speaker of the upcoming second-ever Happy Mom Conference (you can buy tickets here), happening on May 4 in Los Angeles, Landry takes her job as a mom seriously, but she also says that she takes herself much less seriously at 45 than she did in her younger years. The focus is no longer all on her. There are also three little people who need her.

"Now that they’re older and more independent and not so chubby and cute anymore — they’re still cute, but in a different way — it’s now just balancing really it all — or trying to — with them and their busy schedules and guide them and their choices and navigate this world and life and their friends and what’s going on around them, help them process it all in a positive, happy way," Landry tells me over the phone, of how her role as a mom as changed over the years.

And it's a role that she embraces.

Because Landry is able to work at home, she's also able to drop her kids off at school, take them to their activities, help them with homework, and more, which, for her, was something that she wanted to prioritize. However, that doesn't mean that her work isn't likewise a priority.

"I do know that my work really fulfills me and I really get a lot of joy from working and, on top of that, to be surrounded by like-minded women, women that kind of think outside the box, women that I can look up to as a mentor, where they sort of force me to think outside of myself and grow in different ways, that’s that community, right?" Landry says.

That being said, who you choose to be in your community is an important decision. After all, you wouldn't share your wins, your hopes, your disappointments, or your work in progress with just anyone. So Landry argues that you should absolutely be "picky." Or selective, if you'd prefer.

"I think you need to be around women that are positive, women that lift you up, women that you learn from, that you grow, that you admire, I think those things are almost as important as just surrounding yourself with just a community of friends," Landry explains. "What I’ve realized is life is short and life is busy and I really need to surround myself with people that lift me up in the best possible way and allow me to grow and make me want to grow, give me that motivation, that fire, just to be that amazing example. So I think that is so important, as important as just having a community of women around you. Be picky."

This idea of a supportive, uplifting, like-minded community — and it's importance to everyone's successes — is what Landry hopes to share with Happy Mom Conference attendees. She believes that compassion and connection can help everyone grow and feel supported. But the word "like-minded" is one that Landry uses a lot. It's not enough to just get along with people when you're assembling your own little community — there's power in walking similar paths, in seeking out similar things.

"It’s just, to be in that space, with other women, like-minded, that are on that same journey as you, are wanting those same things, or some of those same things, as you want for your own life, it’s a feeling… it really sparks joy, it really sparks joy and you want to have that more," Landry says. "So for me to encourage them to find that, what they’re going to experience that day in that room with all of those women, to find that daily in their own lives, either with their friends, or creating their own community where they can have access to that every day, once a week, is so important, I think, for their growth. And it’s just that sense of community that we all need and that really makes a huge difference in our lives, as a woman, I think."

Real, substantial, genuine friendships between women have, in fact, been proven to be beneficial. A 2009 study from researchers at the University of Michigan, for example, found that emotional connections between women can lead to higher levels of progesterone, which can lift your mood and lower stress, as per Hello Giggles.

Community can raise everyone up. But finding yours can take some time. As far as Landry is concerned, though, that's perfectly fine. Find the gems. You deserve it.