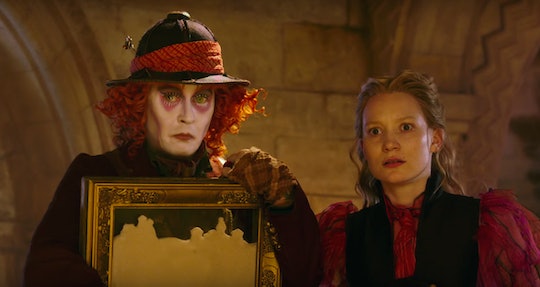 'Alice Through The Looking Glass' Trailer Premieres, & It Looks Stunning

Disney gave us a glimpse into its latest live-action project today with the release of its first Alice Through The Looking Glass trailer — the sequel to Tim Burton's 2010 flick, Alice In Wonderland. While the second installment in the series is being directed by James Bobin, Burton is still onboard — though this time he's donning his producer's hat. According to Variety, other returning faces include Johnny Depp, Mia Wasikowska, Helena Bonham Carter, Alan Rickman, and Anne Hathaway. And, in a new and exciting twist, it seems Sacha Baron Cohen has signed on as the evil and villainous Time.

Adapted from Lewis Carroll's Through the Looking-Glass, and What Alice Found There, this movie is slated to follow Alice's second venture into Wonderland, though this time Alice transports herself using a special mirror which allows her to see much more of the land than before. And while I don't know much, I do know the movie looks a lot like its predecessor, if the trailer is any indication. Through The Looking Glass is bright, whimsical, and fanstastical — and I am willing to be fans of the original film will enjoy this new trip through Wonderland just as much.

Mark your Google calendar: Alice Through the Looking Glass will hit theaters — in 3D — on May 27, 2016. (Non-3D screenings will also be available.)