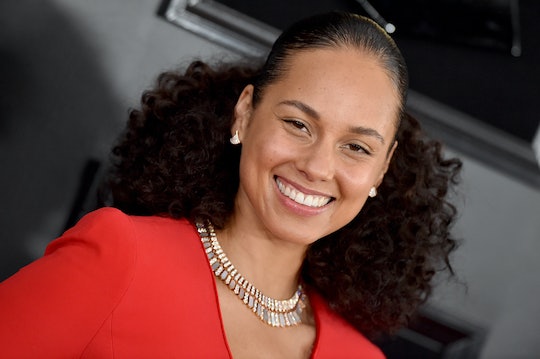 It's already well-established that Alicia Keys is a badass feminist. For starters, the famous singer is an outspoken women's rights advocate who's ditched makeup, boldly wears what she likes, and belts out empowering songs. So it's not exactly shocking that she is also raising a seriously woke son. And just recently, Alicia Keys called out gender norms after her 4-year-old son was excited to get a rainbow manicure, but then got nervous about what people might think.

On Saturday, Nov. 9, Keys shared an experience involving her 4-year-old son, Genesis, along with her thoughts on gender stereotypes. The mom of two, who also has a 9-year-old son name Egypt, took to Instagram to vent about her frustrations, which stemmed from a weekend visit to a nail salon with her little guy.

As Keys explained explained in the video, which is just over two minutes long, Genesis had told the nail salon worker he wanted rainbow colors on his nails. After the lady painted each nail a different color, however, her son suddenly declared, "Mommy, I don't want this on my nails." And the reason why is heartbreaking. "I was like, 'Why? You were so sure. You were good.' And he was like, 'People are not gonna like it,'" Keys explained in the video. "Can you believe this? 4 years old. He's 4! And he already understands the concept that someone is gonna judge him because he chose rainbow colors on his nails."

Thankfully, though, Keys' reassuring words to Genesis were enough to change his perspective. The wise mama explained to her son that people would love his nails because they show "how creative" he is. She insisted, "Stick with it. You chose it. You liked it. You do it." Keys also told Genesis that plenty of guys paint their nails.

"And that made him feel better. But it just got me to thinking how completely judged we are all the time," she continued. "The way I see it is that there's masculine and there's famine energies inside of us all. Period. That's just how it is. And it gets concerning to me that we can't just explore these different sides of ourselves, you know, these different energies that are within us."

Keys' followers absolutely loved the message she sent to her son, along with her overall message about gender stereotypes. One Instagram user commented, "I loved your feedback to him. So beautiful...this type of support is so valuable & builds confidence in decision making. I love your rant & agree 100%."

Another follower declared, "This kid. This expression. This parenting. This thinking. THIS is the stuff that will change the world. For the better."

Meanwhile, Keys' husband Kasseem Dean — a music producer known professionally as Swizz Beatz — commented, "He’s a young King and he can explore and express his creativity at anytime! We support it as his parents."

This isn't the first time Keys has highlighted her conscientious way of raising her children. The Girl on Fire singer opened up back in 2016 about the fact that she doesn't allow her son to watch "sexist" Disney movies. "Have you watched Snow White lately?" Keys told The Edit at the time. "I get real funky about the classics; I don’t like [my sons] watching it. It’s totally sexist, misogynistic — she’s cleaning for seven dwarfs. There’s nothing wrong with a woman who chooses to stay at home with her family, it’s a hard-*ss job, but it’s the way it's spoken about."

Personally, I've loving the way Alicia Keys is raising her sons to challenge gender stereotypes. I have a feeling her sons will grow up to be feminist badasses just like their fierce mama.