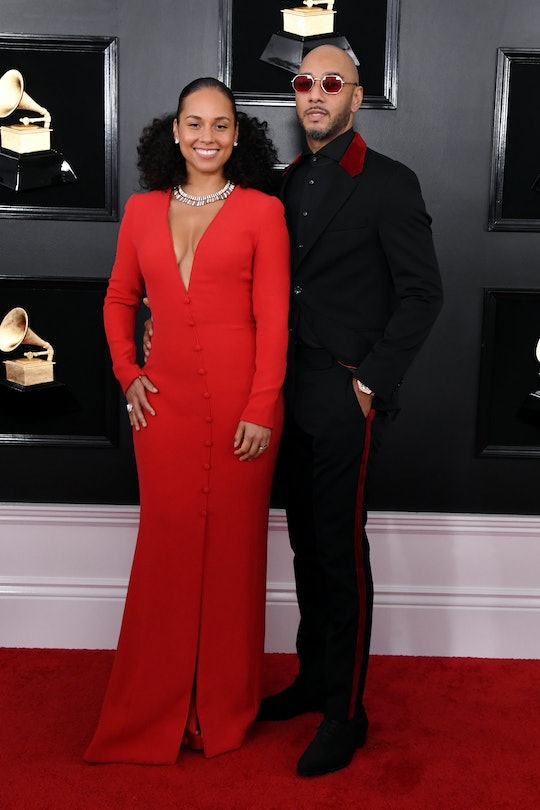 When it was announced that Alicia Keys would host the 2019 Grammy Awards, no one knew what to expect. After all, it's been a while since the "Fallin'" and "If I Ain't Got You" singer (and mom of two) released new music (like, three years to be exact). But fans shouldn't have had to worry, because Alicia Keys' red carpet look (and her hosting skills) certainly delivered on Sunday night.

Early Sunday night, Keys stepped out on the red carpet with her husband, producer Swizz Beats, ahead of her big hosting gig and looked absolutely incredible. The singer and coach on The Voice looked gorgeous in her red colored dress. She really could not have been any more stunning — and she reminded everyone what they have been missing while she has taken a (small) hiatus from music.

Seriously, can Keys just be on every single red carpet from here on out? Not only did her appearance on the red carpet prove that she needs to make some new music ASAP, but that her presence was definitely missed. Needless to say, she came ready to perform when she showed up on the red carpet — and people clearly took note. Just look at how great she looks in these photos from Sunday night.

It's hard to deny that she looked glowing on that carpet.

Just days before the awards ceremony, Keys, who has been nominated for 29 Grammys over the past 18 years, told Rolling Stone that she took the job as host to empower other musicians whose shoes that she had been in before. Keys said:

The reason I felt like this was such ... a natural moment because I have been blessed to have been on this stage before, multiple times, and understand what it is, what it feels like, what the artists are going through. That's what makes me excited to celebrate so many amazing nominees, particularly women nominees, so many who are my friends. There is a sense of true music community I can bring to the stage and I love the ability to lift each other up. It feels like the right thing.

And if people couldn't already sense Keys' excitement to host by the huge smile on her face on the red carpet, she told Rolling Stone that she was pumped to have this honor:

I feel like we are truly a part of a celebration, bringing the light, bringing the energy, and continuing to make the statement that music is such an important part of all our lives.

On Sunday morning, before she got ready for her big red carpet appearance, Keys shared on Instagram that she was meditating to get herself ready for her big day in order to calm herself and "surround herself with light," according to Entertainment Tonight.

But no matter how nervous Keys got ahead of Sunday, there were two people to keep her very humble — her two sons, Egypt and Genesis, who are eight and four years old, respectively. After it was announced that Keys would be hosting the Grammys, she took to Instagram where she shared a hilarious video of her sons reacting to her big news, according to TODAY. Needless to say, they weren't impressed.

"What's the Grammy's?," Egypt asked in the video.