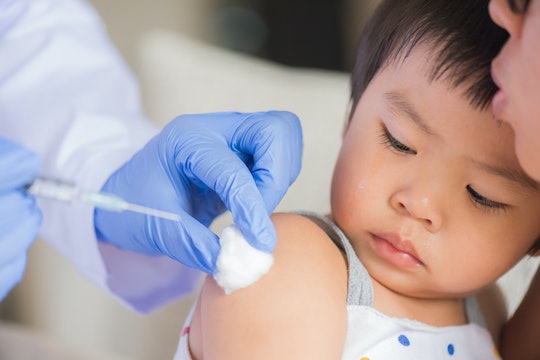 It's been said before, but it's really never too soon to start thinking about scheduling those appointments to get the flu shot for your family. In fact, according to the American Academy of Pediatrics' vaccine recommendations for the 2018-2019 season, all kids should get the flu shot ASAP, or at least by the end of October.

"Everyone over six months of age should get their flu vaccine before Halloween," pediatrician Dr. Jennifer Shu told CNN in a recent interview. "Don't go trick-or-treating unless you've had your flu shot."

While the flu vaccine is available in both mist and shot form, the AAP is recommending that parents choose the shot form of the vaccine as it proved to be the most effective in combating the illness in the 2017-2018 flu season.

"Staying healthy is the goal for all of us. As a pediatrician and mom, I see too often how quickly the flu spreads," pediatrician Wendy Sue Swanson said in the AAP's policy statement that was released this week. "Unfortunately, you can spread influenza without realizing it because some infected people begin to spread the virus a day or two before they have symptoms. Get the shot. It just makes sense."

It's a common misconception, and often a huge source of debate among parents, that the flu shot can actually cause the flu. This is completely impossible, according to Dr. Michael Chang, a pediatric infectious disease specialist with Children’s Memorial Hermann Hospital in Houston, Texas, who spoke with NBC News last October. As he told the news outlet:

A lot of times people will say they or their children got the flu from the vaccine, and that is just not possible. That said, some people do feel bad after: muscle aches, low grade fever, achy arm [where they had the injection]. I always tell patients that this is good in the sense that it means your immune system is having a response, which is what we want.

While practicing good hygiene and self care might seem like common sense ways to prevent influenza from spreading, people often need reminders, which is why the AAP's updated policy is important this time of year. According to the Centers for Disease Control and Prevention, beyond getting your flu shot, be sure to avoid being near sick people, wash your hands regularly with soap and water, and cover your nose and mouth if you cough or sneeze.

According to the CDC, children, especially those 5 and under, are most at risk for complications from the flu because their immune systems are not fully developed, leaving them vulnerable, which is one of the many reasons why the flu shot is crucial.

Flu shots are available at a pediatrician's office and are often covered by insurance, but they can also be found locally at flu shot clinics for low cost or sometimes free of charge. Have a look at the CDC's website to look up locations near you.

As always, a pediatrician is your best source for any questions about what's right for your child. So, never hesitate to give them a ring, or an email, to resolve any concerns you might have about this upcoming flu season.

In the end, a sick kid is no fun, and the flu can be dangerous. And as most parents know, if one kid gets it, the whole family does too. So to ensure you can stick to fun fall adventures — like pumpkin spiced treats and changing leaves — rather than a sickness that can knock your whole family out of commission for weeks, get your flu shots ASAP.