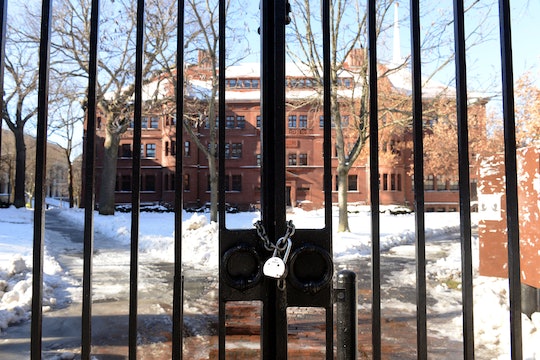 The insidious issue of sexual assault on college campuses is a divisive one. This is especially true at Harvard University, where many undergraduate social clubs traditionally exclude women. These "Final Clubs" are steeped in selectivity and secrecy, and the leadership of at least one of them seems to be steeped in a desire to remain on the wrong side of history and to perpetuate dangerous ideas about violence against women. On Wednesday, after a Harvard task force identified several gender-related issues among those groups, the graduate board president of the 225-year-old Porcellian Club shared an unprecedented public statement, in which he asserted that if the all-male Harvard club began admitting women the number of rapes and sexual assaults would increase.

“ ... We are mystified as to why the current administration feels that forcing our club to accept female members would reduce the incidence of sexual assault on campus,” Charles M. Storey wrote in an email to The Harvard Crimson. “Forcing single gender organizations to accept members of the opposite sex could potentially increase, not decrease the potential for sexual misconduct.” (Final Clubs are not officially part of Harvard, but face an April 15 deadline to inform the administration whether they intend to remain single-sex.)

Last year, The Crimson found that 31 percent of female undergraduates at Harvard reported having experienced "nonconsensual sexual misconduct" — compared to the national average of 23 percent, according to a survey conducted by the Association of American Universities. Storey's statement reveals at least part of the unsettling mindset that may, perhaps, lend itself to those rising numbers — that oft touted "animalistic instinct" argument that says men simply are unable to control themselves around women.

Activists have urged a pivot in the national conversation from teaching women how to protect themselves from rape to imploring men to not try to rape them in the first place. To suggest that women should be excluded from networking opportunities and time-honored traditions to protect men from the possibility of sexually assaulting them smacks of victim-blaming.

The fact that a high-ranking Porcellian Club member has suggested that men in the organization would be potentially unable to stop themselves from sexually assaulting female peers shows that the environment within them likely is hostile to women, and that needs to change. After all, when those with power choose to ignore problems of sexual assault and gender violence, instead pinning the blame on women for simply existing, things tend to get a whole lot worse, because women are further punished in the process.

The concept of continuing to cultivate a culture in which Harvard women do not even have the option of participating because of what men might do is inexcusable. If Storey and the Porcellian Club are unwilling to fight sexual violence by changing the culture and embracing women as equals, instead of choosing instead to maintain a status quo that ensures they're ignored, it's a sign that things definitely need to change. Scenarios such as the one Storey suggested make women the victims twice, and fail to hold men appropriately accountable.

In a statement on Wednesday afternoon, Storey attempted to clarify and half-apologize for his earlier letter, writing,

In a letter to the Harvard Crimson regarding private clubs of Harvard, I attempted to make a point regarding efforts to address sexual assault on campus. Unfortunately, I chose my words poorly and it came out all wrong. This failure has led to extreme and unfortunate misinterpretations, which were not my intentions at all. I take the issue of sexual assault extremely seriously, and I am truly sorry to those I have offended.

Whether or not the Porcellian Club itself decides to start admitting women is still up in the air. But for now, Storey's comments have proven that there's still a lot of headway to be made.