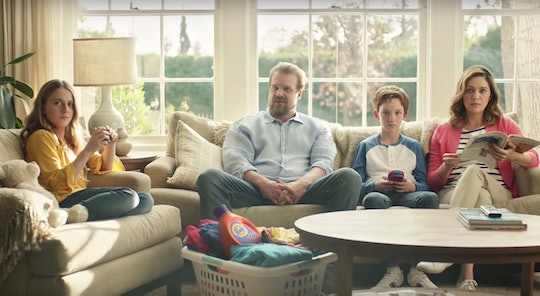 All Of David Harbour’s Tide Super Bowl Commercials In One Place, You’re Welcome

If you thought Super Bowl Sunday was all about watching football and stuffing your face with buffalo wings, or perhaps that Justin Timberlake's halftime performance would be the water cooler conversation to have come Monday morning, you'd be sorely mistaken. In case you missed it, Sunday was all about everyone's favorite Stranger Things star and all of David Harbour's Tide Super Bowl commercials, because they absolutely stole the show and won the night.

If you were hoping to watch them in succession or on repeat (no one could blame you), look no further: here is every single one of them from this year's Super Bowl. You're welcome.

If you're new to the internet's obsession with all things David Harbour, first of all, welcome, and allow me to fill you in this glorious, glorious craze. Harbour is best known for his role as Chief Jim Hopper on the Netflix hit Stranger Things. Aside from acting, he's been spotted on Twitter agreeing to officiate a fan's wedding this September, crashing a California high-school student's yearbook photo, and asking his followers to help him secure a trip to the Antarctic so he could dance with penguins with Greenpeace, where he'll hopefully bust out his now-iconic Hopper dance moves.

Tide absolutely scored a touchdown (see what I did there?) with this celebrity choice for its Super Bowl campaign. So let's dive right in shall we?

Tide Released A Few Teasers Ahead Of The Super Bowl

From zooming in a sports car to grabbing himself a bottle of beer at a bar, Harbour wants you to know this is not just your average laundry detergent ad. See how there are no stains on every shirt? Now that's clever marketing, or least that's what we all think when Harbour puts it into our minds...

As Harbour explained to Adweek about the ad campaign:

It’s wildly self-aware. The fact that you have this character who’s sort of this Rod Serling of The Twilight Zone of advertising, sort of coming in and being like, "Wow, maybe every ad is like a Tide ad," and then he pops up in all of these different ads to kind of reveal to you that what you think you’re watching is not actually what you’re watching.

Remember the Old-Spice guy? Of course you do. Harbour joins Isaiah Mustafa in this quick 15-second ad and delivers one line.

"I'm in a Tide ad," Mustafa tells the camera as Harbour chimes in, "Nice pants."

In this final 15-second ad, Harbour starts off by gazing at a dewy countryside as a horse trots by. He says, "Beautiful... like a Tide ad." The ad then cuts to a woman staring at an animated figure who looks a lot like Mr. Clean until Harbour chimes in, "Sarah, Sarah! It's a Tide ad," and then breaks out some of his best Chief Hopper dance moves.

If you can't get enough of Harbour in these ads, you are absolutely not alone. Many people quickly took to Twitter on Sunday night and proclaimed that Harbour was the true winner of the 2018 Super Bowl.

Yup, the game was called before it was even over. Sorry Eagles and Patriots... I know you all worked really hard to make it to the Super Bowl this year, but Twitter has spoken: David Harbour deserves that trophy.