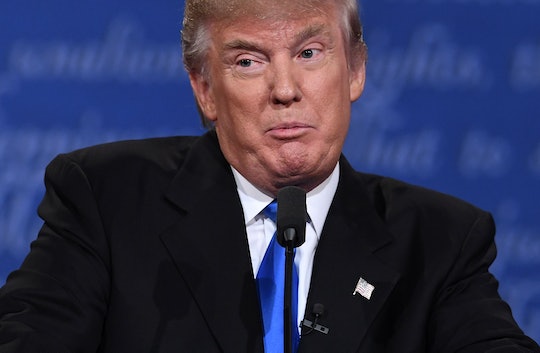 All Of Donald Trump's Grammatical Errors From The First Presidential Debate

The first presidential debate has been afire with fact checking, as to be expected, but it doesn't look like anyone was prepared to have to do quite so much grammar-checking. Given Donald Trump's somewhat notorious tweets, it shouldn't have been that surprising that his side of tonight's debate was rife with grammatical errors. Did you catch them all? Have no fear if you didn't, because here are all of Donald Trump's grammatical errors from the first presidential debate. Or at least most of them. Honestly, it was hard to keep up.

The Washington Post ran an article earlier this year that assessed Trump's public speaking to be just below a sixth grade reading level. It was actually based on a real academic paper called “A Readability Analysis of Campaign Speeches From the 2016 US Presidential Campaign", which was researched by Carnegie Mellon University. Readability scores are used to determine how difficult or complex a particular piece of writing is (in this case, speeches).

Readability usually looks at things like word choice, length of sentences, use of verbs and adjectives, and the overall length of the piece. Depending on one's grasp of grammatical concepts, their overall ability to write (or speak) consummate with their education is denoted by traditional grade level (like fifth, sixth, or seventh grade). The report revealed that, by the studies rank, Trump has the grammar of a typical American fifth grader.

So during the debate, Twitter was quick to point out his use and misuse of words and phrases — something that he seems as prone to doing when he's speaking as he is when he's crafting a tweet.

While it's possible that some of Trump's unique way of speaking could just be regional, the linguists who analyzed presidential levels of grammatical prowess indicated that education certainly plays a major part. Trump's score was actually lower than George W. Bush's, who is infamously remembered for his quote about education: "Rarely is the question asked: is our children learning?" Which in and of itself spawned a series of Bushisms that outlasted his presidency.

One has to wonder, then, just what he thought of the American public tonight as the debate — and his grammatical mishaps — continued.

If you're curious and need a little post-debate fun, The Independent even created a readability quiz that lets you find out if your grammar is better than a fifth grader's, or, apparently, Trump's.