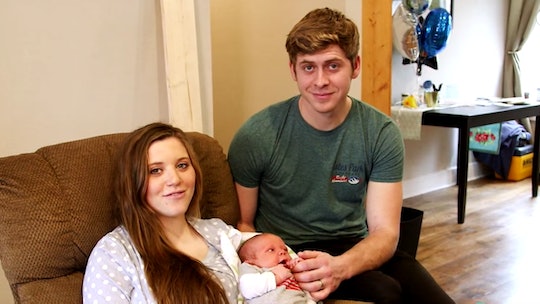 It seems there's rarely a dull moment on TLC's Counting On. If it's not a new courtship, then it's planning for a wedding, announcing a pregnancy, or watching a birth story unfold.( I guess it's not too surprising, considering there's 19 siblings in all.) Although the series is considerably behind what's currently happening in the Duggars' lives, fans still have a pretty good idea of what's going on thanks to social media. And all of Joy-Anna Duggar's photos of her son Gideon so far show she's loving motherhood.

For those who might have lost track, Joy-Anna is actually ninth in the Duggar sibling lineup. She married long-time family friend, Austin Forsyth, in May 2017 — and they welcomed their first child on February 2018, according to E! News. (Although Joy-Anna initially attempted a home birth, her midwife determined the baby was breech after 20 hours of labor, Country Living reported. Ultimately, she delivered her baby boy via emergency C-section — all 10 pounds and 3 ounces of him — on Feb. 23. Which means their baby boy, Gideon, is coming up on 7 months old already. Time flies!

Joy-Anna and Austin's first two photos of their baby boy were shared together on Feb. 26 — just three days after his big arrival. The first shot features the new mom holding their son, with one of Austin's arms wrapped around his wife and the other lovingly touching the newborn. The other shot is a close-up of Joy-Anna cradling a snoozing baby Gideon in her arms.

In a recently-aired episode of Counting On, Joy-Anna touched on life as a new mom, according to People. “Being a mom is in a lot of ways easier than I thought and then in a lot of ways, harder than I thought," she said. "I knew that my mom had gone through a lot with all of us kids, but I didn’t think it was that hard just because I had always taken care of kids myself. But it’s given me a whole new appreciation for moms out there that have kids.”

Although the Forsyths formally introduced their baby boy with a TLC video on March 6, it was a full month after Gideon's birth that they shared their next photo via Instagram. The adorable shot 1-month shot featured Gideon chilling out on a blanket with a fancy frame around the number "1." (Just look at his little expression!)

Gideon's next appearance on Instagram come in a series of photos promoting a marriage retreat at which Joy-Anna and Austin were participating. Their baby boy was apparently helping mom and dad "getting some work done" ahead of the event, during which they gave a testimony.

By the time Gideon's third photo rolled around at his 2-month part, it was clear that Joy-Anna was probably going to focus more on sharing big milestones with her followers — rather than her day-to-day life as a mom.

With that said, the Forsyths were sure to mark Joy-Anna's first official Mother's Day with a sweet family shot. (So sweet!)

With a few months of motherhood under her belt, Joy-Anna started sharing more non-milestone updates with her followers starting in May. You have to scroll over a few times, but Gideon makes a low-key Instagram appearance while wearing a "Hero" body suit in this post from May 22.

This photo of Gideon spending some quality time with uncle Josiah and Josiah's other nephew, Duke, gave fans a double dose of baby cuteness.

Once again, Gideon is hidden several photos deep in this July 5 post. (But I promise it's totally worth those few extra clicks/swipes to see his smiling face!)

At a glance, this post appears to be just another renovation project the Foryths are tackling. But baby Gideon was clearly along for the ride in the July 23 post. Just keep scrolling.

This August Instagram post proved once and for all that baby Gideon is basically a mini Austin. The first photo is Austin as a baby, and the second one is Gideon — and the resemblance is insane!

Finally, Joy-Anna's most recent Instagram photo of baby Gideon from Aug. 27 features Gideon holding his own bottle. (He's growing up so fast!)

I can't say for sure — considering I've never had cameras following me around for a reality TV series — but I would assume that it can't be easy having the world watch you cope with some of life's most vulnerable moments. You know, like those last few weeks of pregnancy when I felt like complete and utter crap. Or during labor, when I was exhausted, anxious, and scared. And even during those first few weeks postpartum when I was sleep-deprived and wondering, "What the heck have I gotten myself into?" Yet, that's exactly what the Duggar sisters have done on TLC's Counting On.

So it makes perfect sense to me that after sharing so much about her life with viewers, Joy-Anna would want to go light on social media. (Not to mention, she's had the "benefit" of watching her older siblings get criticized/trolled online for certain posts and photos.) Although the Forsyths only seem to post a handful of Gideon photos per month, one thing's for sure: She's loving the mom life.

More Like This
Khloé Kardashian Reveals Tristan Thompson Proposed To Her Last Year & Why She Said No
Kim Kardashian Stars In Hilarious House Of The Dragon Parody, The Targashians
Lifelong Teacher Dr. Jill Biden Loves Watching Abbott Elementary Too
Gabrielle Union Admits She May Be Becoming A Bit Of A Dance Mom With 3-Year-Old Kaavia