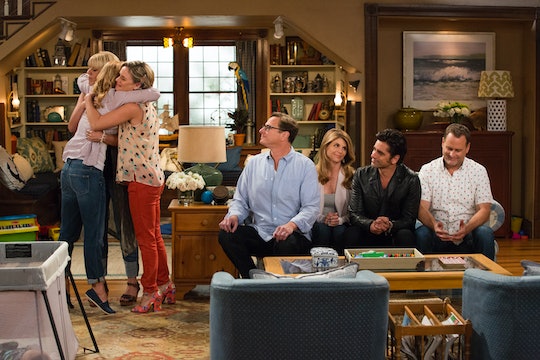 It's Fuller House day! Are you rocking your side ponytails and a plaid flannel tied around your waist like I am? No? Well, I suppose we each choose to relive the nostalgic staples of our childhood in our own ways. In the new Netflix premiere of Fuller House, be prepared for a trip down that '90s memory lane for which you've been waiting over 20 years. We've got all of the Fuller House references to Full House right here, so you can squee at all the clever little nods producers have spread throughout the series.

From bringing back 99 percent of the original Full House cast (ahem, Mary-Kate and Ashley Olsen) to all of the catchphrases we grew up with and repeated ad nauseam during the '90s, Fuller House — particularly the premiere episode — is definitely a sappy love-letter adoringly crafted to all the Full House fans through the years. There's no denying that Fuller House feels like a television anachronism, with its canned laugh track and periodic audience "woooOOoooo's" — but there's such a genuine earnestness to Fuller House that you can't help but chuckle along. Is Emmy worthy? No way — but boy howdy is it a whole lot of fun to watch. SPOILERS AHOY!

The premiere of Fuller House is a Full House reference overload. To be fair, it is considered the reunion for the show, so it brings back everyone from Danny, Jesse, and Joey to even Rebecca and the twins. And of course, Kimmy Gibbler and D.J.'s high school sweetheart, Steve Hale. Even Comet *raises a mournful glass* gets a mention. While there are many references to the original Full House in the premiere, here are some specifics:

What did we miss? What Full House references were your favorite?

The complete first season of Fuller House is available now for streaming on Netflix.