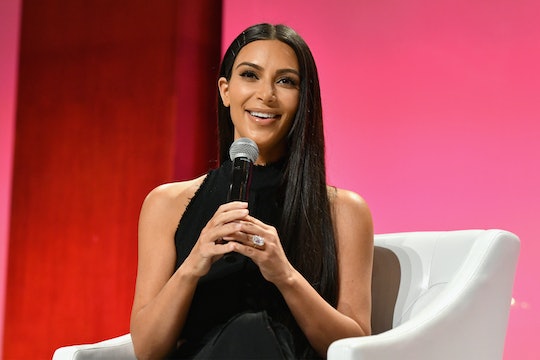 All Of The Rules Kim Kardashian's Surrogate Reportedly Has To Follow

But first, let's just back up for a second: Kardashian has yet to confirm that a) she's hired a surrogate or b) that her surrogate is reportedly three months pregnant, and while reps for Kardashian have not returned Romper's requests for comment, multiple sources confirmed the awesome news to E! News in June.

After two very difficult pregnancies, Kardashian was warned by her doctors that trying to conceive and carry a third pregnancy herself could be life-threatening. On her website, Kardashian revealed that she suffered from both preeclampsia and placenta accreta, both incredibly dangerous medical conditions if left untreated. On Keeping Up With The Kardashians, the 36-year-old mother of two confessed that she had made peace with the idea that she wouldn't be able to safely carry a third pregnancy, and that she was exploring the possibility of surrogacy. Here's a look at those reported rules Kardashian's surrogate must follow.

No Smoking, No Drinking, & No Drugs

While it seems like a rule like this would be a no-brainer, it's always better to get even the most basic assumptions about healthy behaviors during pregnancy down in writing when it comes to gestational surrogacy. A contract rider requiring the surrogate to abstain from smoking, consuming alcohol or drugs during pregnancy is pretty standard issue, according to FindLaw.

No Hot Tubs Or Saunas

A soak in a hot tub or a jaunt in a sauna sounds like an amazing way to help with the aches and pains of pregnancy, most medical professionals advise against it. According to the American Pregnancy Association, hot tubs and saunas can elevate a pregnant woman's body temperature to levels that could cause birth defects in her unborn fetus. Yeah, probably a good idea to stay away then.

Don't worry — this isn't about Kardashian being worried that her surrogate might upstage her in the hair department. While WhatToExpect.com notes that hair dye could pose risks to the baby during pregnancy, the medical jury's still out on the definitive risks, simply because there just isn't enough evidence out there. For Kardashian, it appears they're taking a "better safe than sorry" approach.

It's not that Kardashian's surrogate must suddenly learn how to potty train a cat — she just can't handle or change cat litter. The reason? Pregnant women are at risk for toxoplasmosis, an infection caused by bacteria that can be found in cat feces. Gross. But besides being gross, toxoplasmosis is super harmful to babies in utero, so best to avoid the litter box altogether.

According to the U.S. Department of Health and Human Services, raw fish puts pregnant women at risk for a number of food borne illnesses that could harm both woman and baby. Unfortunately for Kardashian's surrogate, that means no sushi for the time being.

Only One Caffeinated Beverage Per Day

The American College of Obstetricians and Gynecologists says that moderate caffeine consumption during pregnancy is OK. The ACOG recommends pregnant women should consume no more than 200 milligrams of caffeine per day.

While it might seem Kardashian has drawn up some kind of terribly restrictive contract with her surrogate, most of these are in line with best practices and guidelines for pregnant women. Kardashian is reportedly paying her surrogate nearly $70,000 for her time and expenses, so I certainly don't blame her for establishing common sense guidelines to protect such a precious investment.