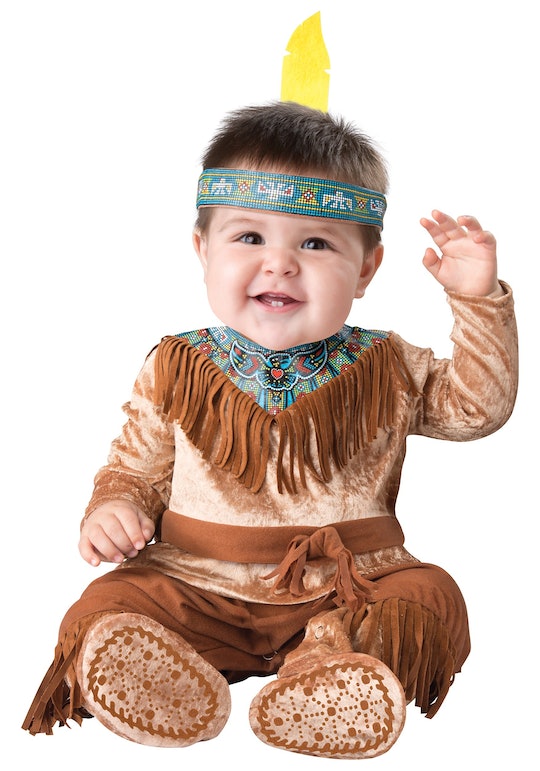 All Of The Sexist, Racist, & Just Mean Halloween Costumes You Should Not Dress Your Kid As This Year

Halloween is a fun, free-spirited holiday that offers both kids and adults the chance to escape reality for an evening. Costumes allow you and your kids to become someone or something else entirely, and get pretty creative in the process. For the vast majority of people, it's a fun, innocent game of dress up. Avoiding all of the sexist, racist Halloween costumes your kid should not wear this year is a good start.

If insensitive children’s costumes sound like an outdated problem, they aren’t. Recently several costume sites pulled a “World War Two evacuee girl” outfit, facing backlash for essentially selling an Anne Frank Halloween costume, according to the BBC. Decried as insensitive and trivializing, the costume is maybe not the best way to introduce children to the realities of history. Plus, just a couple years ago, Walmart faced scrutiny for selling an Israeli soldier costume for kids, according to the New York Post. Make of this what you will, but both costumes are still available for sale from some retailers, and the reviews sections are full of spirited debate about whether these costumes are appropriate, to say the least.

What’s the problem with these costumes? Well, they take away from what Halloween should be about for kids: fun. It’s different when adults put on deliberately satirical or political costumes, because they’re (hopefully) making that choice with the full understanding of the meaning. Kids, though, typically just want to enjoy fun costumes and candy. With the zillions of amazing Halloween costumes for children available today, there’s absolutely no need to put an insensitive or politically charged costume on your tot. Your kid probably just wants to dress as Spiderman or Pikachu anyway, so let them enjoy this time.

This article was originally published on Oct. 12, 2017