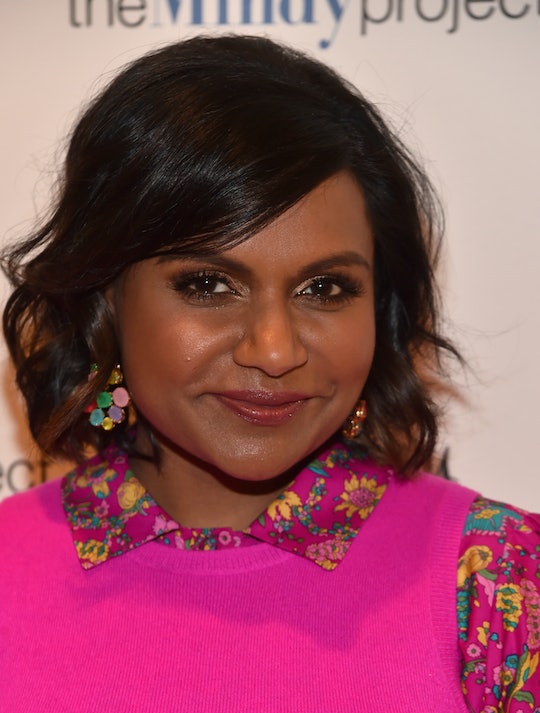 All Of The Times 'The Office' "Foreshadowed" Mindy Kaling's Pregnancy

During nine (too) short seasons, the Dunder Mifflin staff bestowed on us a wealth of valuable information, including which bear is best, the need for a cure for rabies, and maybe, just maybe, that Mindy Kaling was destined for motherhood. Since Kaling's pregnancy news was released, Office and Mindy Project fans have been freaking out, and not only because they love Mindy Kaling. They're also obsessed with looking back for any "clues" from her Dunder Mifflin days that motherhood was around the corner for her. And indeed, fans have dug up supposed times The Office foreshadowed Mindy Kaling's pregnancy.

Kaling's character from The Office, Kelly Kapoor, is just that — a character. Kelly is confident, honest, and always speaks her mind. Between trying (and failing) to lose weight via tapeworm, sharing her extensive knowledge of texting etiquette, and calling herself, "Kelly Kapoor, business b*tch," she kept us laughing (and occasionally cringing) from pilot to finale.

Like most personal topics, pregnancy was not a subject that Kelly shied away from — even if it was being used just a trap to keep her lovely loser boyfriend from leaving her. Judging by Twitter, Office fans believe that Kelly's comments about babies and baby bumps totally predicted Mindy Kaling's real life pregnancy announced earlier in July. E! News reported that she had "an unexpected surprise" pregnancy, and the world rejoiced.

Looking for past portents of Kaling's maternal future, fans are harkening back to Kelly Kapoor's failed attempt to keep on-again, off-again Ryan from leaving their hilariously dysfunctional relationship.

Once Ryan somehow manages to get promoted (despite starting a devastating fire intra-microwave) and leaves to work at corporate headquarters, he breaks up with Kelly. He later returns as her boss, Kelly lies about being pregnant, and hilarity ensues.

She even goes so far as to fein pregnancy symptoms to gain Ryan's sympathy and get him back. It works, for a while anyway. As with many of her schemes, Kelly's plan backfires when Ryan finds out that she isn't really pregnant with his baby. He declares (again) that he is done with her. Oh, you two.

This isn't the first time that Ryan and Kelly talk babies, though. Kelly seems to have known from the get-go that she wanted to get knocked up. Although, why Ryan is the man she chooses to gift with the fruit of her loins, I will never understand. No matter how blue his eyes are, he's still the actual worst.

We are also treated to this lovely bit of secondhand commentary on what Kelly and Ryan's baby would be like.

So babies were clearly on Kelly Kapoor's mind. All this baby talk amounted to little more than a few laughs, though, because we never did get to see what a Kelly pregnancy would look like. But maybe that's the joke, guys, especially since Kaling's real-life pregnancy is anything but an attempt to "trap" a man. Since Kaling announced her pregnancy, fans have been praying to the Dunder Mifflin gods that B.J. Novak is the secret father to her child, but Kaling is remaining tight-lipped on that subject. While Novak and Kaling have dated in the past, more recent reports state that Novak and Kaling are just friends. A source told People that Kaling has no intentions of telling anyone who the father is at this time.

Little information has been released about the details of Kaling's pregnancy, but the announcement alone is enough to have her fans (myself included) dying to know more. Until then, I guess we will have to be satisfied with well-timed Office references and Kelly Kapoor-level excitement.