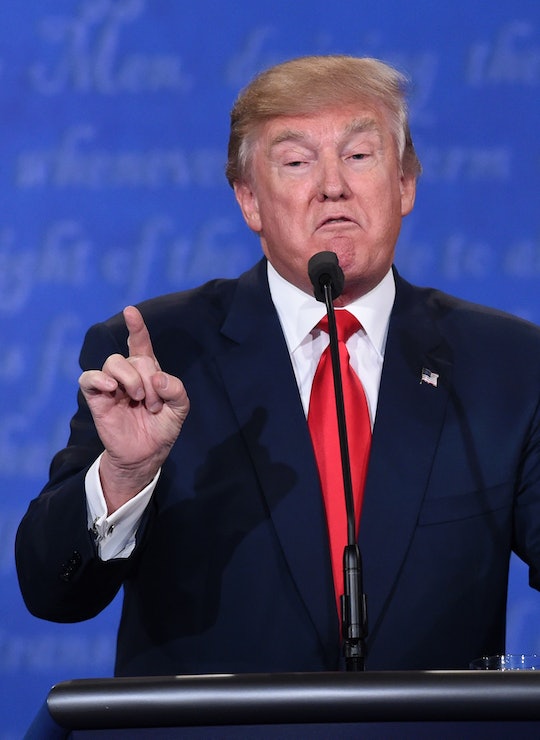 All The Lies Donald Trump Told At The Last Presidential Debate, If You're Keeping Track

Call it gaslighting, call it denial, call it whatever you want, but Donald Trump has a long documented history of difficulty accepting and admitting the actual truth. When he is called out on something that he has actually done or said that doesn't look good, his standard response is just to say "wrong," even if there's proof that it's right. These lies that Donald Trump told at the last presidential debate are just the latest in a long-standing trend.

Among others, Donald Trump has repeated (again!) that he never supported the war in Iraq (he did). He said that he didn't even apologize to his wife after the sexual abuse allegations because he didn't need to (Melania Trump said he did). He said that he never met the women who accused him (he interviewed with one of them for People). He said he never mocked a reporter with a disability (he appears to have done just that). Even debate moderator Chris Wallace addressed him by pointing out that Trump has said several things that are untrue, including that Aleppo had fallen. Trump responded by interrupting the moderator and continuing to argue that it had fallen. It had, dammit! The fact that Trump has a casual relationship with the truth at best is seriously worrisome for the country.

This doesn't even include all of the less verifiable, but no less incredible statements. The most hilarious of these was probably when he brazenly asserted that no one respects women more than he does. I'm sorry, you'll have to excuse me while I laugh and weep like a madwoman for the next 45 minutes. I suppose "respect" could be considered a subjective term, so it's possible that Trump actually believes that he respects women more than anyone else. But since we are being subjective here, I should mention that I do not feel at all respected by Trump. He has also said that our inner cities are a disaster and that he will do more for African Americans and Latinos than anyone else, a claim I find extremely dubious.

Essentially, when watching the debates, I like to do a little test. Every time he is accused of anything by Clinton and he interrupts with a brusque "wrong," it's a good time to Google. She's probably right.