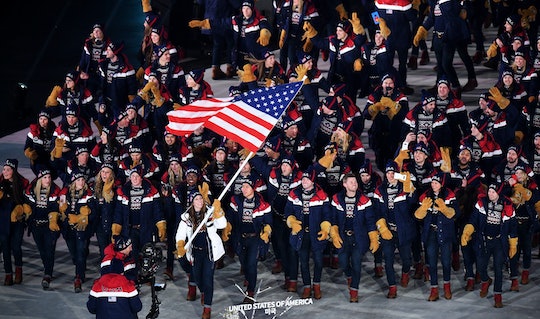 All The Opening Ceremony Songs Played During The Parade Of Nations, Because There Were A Ton Of Bops

Helping keep the Olympic delegations from every nation warm in single digit temperatures as they marched through the open-air PyeongChang Olympic Stadium was a truly well-curated playlist of K-pop hits. All the opening ceremony songs played during the Parade of Nations were certifiable bops and if they can keep athletes motivated through the oft-interminable procession into the stadium, it probably can't hurt to add them to your workout playlist.

Ahead of the opening ceremony, organizers promised a show that would meld Korean history with contemporary pop culture. The latter part of that statement prompted K-pop fans to hope for live performances from the genre's biggest acts, but with the exception of a rendition of John Lennon's "Imagine" by four South Korean artists, we didn't get any live music. (But there's still hope! Remember that the Spice Girls didn't reunite at the 2012 London Summer Olympics until the closing ceremony!) South Korean folk singer Jeon In-kwon, indie rock singer Ha Hyun-woo, K-pop singer Ahn Ji-young, and singer Lee Eun banded together to perform "Imagine," according to The Mirror, and the K-pop tracks were relegated to the Parade of Nations to keep the crowd hyped during the long and often boring march. If any of the songs played gave you a case of earworm, here's a handy guide to every track on the list:

Of course, South Korea's biggest mainstream hit and late-night wedding reception standby "Gangnam Style" was prominently featured to kick things off, and the crowd of 35,000 spectators went wild when the song came on. The dancers, who form the parade route inside the stadium, cheer on the athletes as they process, and keep the crowd's energy up with their nonstop movement, broke out into the iconic choreography from the music video, too. The video smashed multiple records when it debuted in 2012, becoming the most-viewed K-pop video on Youtube, the most viewed video period, the first video to reach 1 billion views, and later, the first video to reach 2 billion views. It's safe to bet on Psy making an appearance at the closing ceremony, I'd say.

We also heard "Likey" by Twice, a nine-person girl group from South Korea, and got a taste of vintage K-pop with Kim Wan-sun's "That Dance in the Rhythm." Wan-sun is popularly known as "The Korean Madonna," having made her debut in 1987, and "That Dance in the Rhythm" was one of her first late-80s hits. Watching live performances of the song from the period, you can see how heavily Madonna influenced everything from her fashion to her dancing and her music.

Big Bang represented the androgynous boyband delegation with their clubby hit "Fantastic Baby." The five-person band's heavy involvement in producing their own music, a rarity in K-pop, earns them critical acclaim as one of the genre's most influential acts. BTS is another seven-member boyband who was featured with their hit "DNA." They boast an impressive social media presence, with Forbes naming them the most retweeted artist in 2016. Twitter subsequently gave them the very first K-pop hashflag for #BTS, according to Billboard.

"Red Flavor" by five-person girl group Red Velvet is exactly the kind of sugary sweet pop that its band's dessert motif would suggest and it was definitely the catchiest track played at the opening ceremony. And although it's not exactly K-pop, when the joint delegations of North and South Korea marched together under one flag, Korean folk song "Arirang" played. It's widely considered to be the unofficial national anthem, according to The Guardian, and it will also play for the joint women's ice hockey team when they compete.