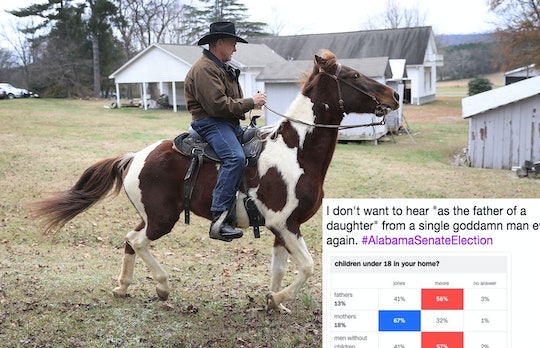 An Alleged Pedophile Almost Won & We Have Fathers To Blame

Last night, Democrat Doug Jones won the Alabama senate race. But celebrating feels... odd. On the one hand, Roy Moore lost: a man accused of sexually assaulting multiple young girls. On the other hand, a man accused of sexually assaulting multiple young girls almost won. Jones narrowly secured a Senate seat with 49.92 percent of the vote. Moore had 48.38 percent. So as I sat in front of my television, feeling my pessimism turn into a full-body sigh of relief, I couldn't — and still can't — consider the outcome a "win." Because, looking at who voted for Roy Moore, one thing is for certain: men who claim to care for women because they're "fathers of daughters," failed us.

In the wake of the numerous sexual assault and harassment allegations levied against Harvey Weinstein, famous fathers and regular dads alike pointed to parenthood as proof they understood.

Men like to paint fatherhood as some sort of magical potion that illuminates for them the rights of children and women. "As a father of daughters," they say, before launching into their bit. It's the "some of my best friends are black" of dads on the defense. And it allows them to distance themselves from known abusers while simultaneously minimizing their role in disbanding their culture. After all, they're fathers.

In the wake of the numerous sexual assault and harassment allegations levied against Harvey Weinstein, famous fathers and regular dads alike pointed to parenthood as proof they understood. "As the father of four daughters," Matt Damon told The Washington Post, "this is the kind of sexual predation that keeps me up at night." And when then-Republican nominee for president Donald Trump was caught bragging about grabbing women by the p*ssy and kissing women without their consent, Senate Majority Leader Mitch McConnell said, "As the father of three daughters, I strongly believe that Trump needs to apologize directly to women and girls everywhere."

But in a Good Morning America interview, Damon admitted that he knew Weinstein had sexually harassed Gwyneth Paltrow (who, at the time, was dating his friend, Ben Affleck), and did nothing. And the nation has yet to hear from McConnell since Trump publicly attacked Senator Kristen Gillibrand in a "sexually suggestive tweet," implying Gillibrand "would do anything" for money. In fact, McConnell has frequently praised Trump, telling the media in October of this year: "We’ve been friends and acquaintances for some time. Contrary to what some of you may have reported, we are together totally on this agenda to move America forward.”

It seems like procreating doesn't provide a man with the moral fiber to vote against a man accused of sexually assaulting teenage girls.

Alabama, the same state that allowed Roy Moore to build a career despite numerous accusations of predation, gave us one of the enduring figureheads of the good father: Atticus Finch. The beloved defense attorney from Harper Lee's To Kill a Mockingbird exists in our consciousness as the ultimate father figure to Scout Finch — white but woke, humble but willing to get out the shotgun to protect his family. The problem is that the majority of real dads in Alabama voted for an alleged pedophile and self-confessed bigot yesterday. Their moment of truth came to defend the children who "sing their heart out for us," and they failed the test.

According to The Washington Post, exit polls show that 56 percent of fathers voted for Roy Moore. Conversely, 56 percent of men without children voted for Roy Moore, too. So, it seems like procreating doesn't provide a man with the moral fiber to vote against a man accused of sexually assaulting teenage girls. Parenthood doesn't give someone the ability to acknowledge that someone banned from shopping malls because he was harassing teenage girls isn't a suitable candidate for the United States Senate. Having a daughter doesn't move a man to demand a congressional hearing of a sitting president that has more than 16 allegations of sexual assault against him. There is no enlightenment, no magical change of heart, and no other-worldly force urging fathers to believe women, trust women, or even see women as equals.

Of course, this is not to say "all fathers." Nathan Mathis, an Alabama dad who lost his gay daughter to suicide, stood outside Moore's election eve rally on Monday night. According to CBS, Mathis was "urging Alabamians not to vote for him and elect him to Senate." Moore has been unapologetically against gay rights and, in 2002 and as a justice on Alabama's Supreme Court, wrote that "homosexual misconduct is and has been abhorrent, immoral, detestable, a crime against nature." And in opposition of Moore's hateful rhetoric, a father stood outside, protesting alone, holding a picture of the child he lost, telling CBS:

"My daughter was a good person. My daughter was not a damn pervert, as Roy Moore called her. Roy Moore, by going out with those teenage girls, he does not deserve to be in the United States Senate. It's just that simple. The man needs to be in a psych ward somewhere with a psychiatrist trying to help him get better."

So while it wasn't "all fathers," it was enough to be reminded that a woman giving birth will not change the hearts of men who truly believe electing an alleged pedophile to the United States Senate is agreeable. The fact that women exist outside of their relationship with their fathers, brothers, uncles, boyfriends, husbands, and the other men in their lives is something 56 percent of Alabama fathers have yet to grasp.

Until the majority of men stop using fatherhood as a reason to excuse themselves from the humbling, sometimes embarrassing work of eradicating internalized misogyny and sexism, we, as a nation, will continue to see our own morality used as a grinding stone each election. Until parenthood becomes more powerful than partisanship, the road will continue to be paved for more men like Roy Moore to gain a following and power.

Until men stop using their relationships with women to justify looking the other way when we're harassed, abused, and silenced, there will be nothing to celebrate.