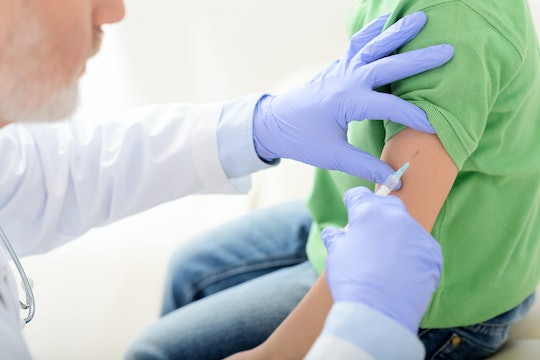 Despite a lot of recent controversy and what you might hear from anti-vaccine advocates and celebrities, vaccines save lives. In fact, almost 1.5 million children have been saved by certain vaccines in the past several years, proving their incredible importance when it comes to protecting kids all over the world. There's been a monumental drop in the number of children dying from meningitis and pneumonia thanks to vaccines, according to a recent study.

Between 2000 and 2015, Hib and pneumococcal vaccines saved an estimated 1.45 million children's lives, according to a study by the Johns Hopkins University Bloomberg School of Public Health. In fact, the rate of kids dying from pneumonia and meningitis fell by as much as 90 percent between 2000 and 2015 after countries with the highest rates of those illnesses introduced vaccines for babies, according to The Daily Mail.

Haemophilus influenzae type B (Hib) and Streptococcus pneumoniae (pneumococcus) are bacteria that may cause meningitis, pneumonia, sepsis, as well as other serious complications, most notably in children, according to ScienceDaily. And vaccines against Hib have "virtually eliminated" it as a public health threat in places where vaccine coverage is high and sustained, the outlet reported.

And while that's a positive update, researchers admitted that there's still a lot of work to do when it comes to combatting these diseases. The lead author on the study, Brian Wahl, Ph.D., an assistant scientist at the International Vaccine Access Center in the Bloomberg School’s Department of International Health, said, according to the Johns Hopkins Bloomberg School of Public Health website:

Further progress against these diseases will depend on efforts in a few large countries. These bacteria still cause far too many child deaths.

Wahl also said, according to ScienceDaily:

The pneumoccocal disease burden is now limited to a small number of countries that have not introduced the vaccine or have not yet fully scaled the vaccines.

Indeed, the researchers concluded that the huge decline in deaths from Hib and pneumococcus was because of the broader use of vaccinations, particularly in many low-income countries. Specifically, researchers estimated that between 2000 and 2015, the pneumococcal conjugate vaccine (PCV) prevented a total of around 250,000 child deaths, mostly after 2010. Hib vaccines, on the other hand, prevented a whopping 1.2 million estimated child deaths, the Johns Hopkins news release reported.

This study, and others like it, prove just how important vaccinating kids is. This study focused on two types of vaccines, and mostly on their impact in "high-burden countries." But right here in the United States, where people tend to have more access to safe vaccinations for their children, many parents are choosing not to vaccinate their kids. Some are doing so out of a misguided fear that certain vaccines lead to a child developing autism — a totally debunked, ableist theory that has been disproven time and time again; the doctor behind the "study" linking vaccines and autism was stripped of his medical license for reportedly falsifying data, according to CNN.

And high-profile names supporting anti-vaccination causes don't help matters. For example, on Thursday, tattoo artist and cosmetics-company founder Kat Von D wrote in an Instagram post that she intends to raise her unborn child "without vaccinations," according to USA Today. This set of a firestorm of discourse on the safety and validity of vaccines, even though studies and scientific consensus has told us over and over that vaccines are safe and effective.

This study drives home the fact that vaccines are incredibly effective more than ever. Since conjugate vaccines against Hib were first introduced in America, Europe, and other countries back in the late 1980s, that virus has all but disappeared as a public health risk, The Daily Mail noted. And through efforts to increase vaccination coverage in other parts of the world, the number of deaths in children from two leading bacterial causes of pneumonia and meningitis have significantly decreased. How much more clear can it be that these vaccines work to save the lives of kids, worldwide?

Dr. Robert M. Jacobson, a pediatrician and former medical director for the Population Health Science Program at Mayo Clinic, told The Daily Mail the difference in the rate of child deaths from Hib thanks to the vaccine is stunning. Jacobson said:

When I was in training we would do all we could to save babies from Hib but there was nothing we could do. Twenty thousand babies a year would die. Then, with the Hib vaccine, even in the first few years, we saw far fewer deaths. Now most pediatricians in training have never seen a case of hemophilia influenza type B. You can barely even imagine it.

So why would anyone want to go back to a time like that?

The bottom line is, vaccines work. They worked to protect millions of kids over a 15-year period who were profiled for this Johns Hopkins study. And this is just the latest of many studies that prove just how effective and life-saving these vaccines can be.

If you really have concerns about vaccinating your child, talk to your doctor — if you trust them with every other aspect of your child's health, trust them with this. They should have the evidence and knowledge to back up just how safe and valuable vaccines are when it comes to protecting all kids, in your own community and all over the world.