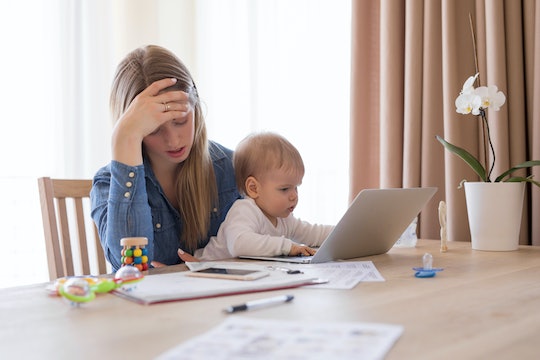 Almost Half Of Families Can’t Afford Necessities Like Food, Study Finds, & Here’s Why

The struggle of families being unable to cover basic needs is, unfortunately, not disappearing anytime soon. A new study found that over one-quarter of families can't afford basic necessities like rent and it's a chilling statistic. In a political climate where policies are directed at punishing poor people, it's not a statistic that's due to disappearing anytime soon.

Working Hard But Struggling To Survive, the study put out by the United Way ALICE Project, found that nearly 51 million households don't earn enough to afford a monthly budget that includes housing, food, child care, health care, transportation, and a cell phone. That's a whopping 43 percent of households in the United States. That number includes the 16.1 million households living in poverty, along with the 34.7 million families that the United Way calls ALICE, according to CNN.

ALICE stands for Asset Limited, Income Constrained, Employed, as noted by their website. Essentially, ALICE families live paycheck to paycheck; they cannot always pay bills, have little to nothing in savings, and an unexpected expense can send these families over the edge, according to the program's website. For many, ALICE is familiar, and may even define the households that they grew up in or are in now.

But the question is: why are so many families unable to afford the basics?

Part of the problem is people simply aren't making enough money. According to CNN, about 66 percent of jobs in the United States pay less than $20 an hour. Minimum wage varies based on someone's exact location, but the federal minimum wage is set at $7.25 and hasn't risen since 2009, according to the Washington Post. When accounting for inflation, the federal minimum wage was at its highest in 1968, as CNN reported, when it equaled $11.18 in present dollars.

Minimum wage was created to ensure a minimum standard of living to protect the health and well-being of employees, according to Cornell Law School. However, Congress doesn't automatically adjust minimum wage with inflation and, as a result, it has steadily lost value since the 1960s.

A Living Wage Calculator notes that minimum wage does not provide a living wage for most American families. "A typical family of four (two working adults, two children) needs to work nearly two full-time minimum wage jobs each (a 77-hour work week per working adult) to earn a living wage," the site reported.

Along with lack of proper compensation, families have to deal with proposed budget cuts, which target programs they need to survive. Trump's proposed budget for the fiscal year 2019 includes ending or cutting many government programs. Trump's devastating policy plan around the Supplemental Nutrition Assistance Program (SNAP) was heavily critiqued in media.

Part of Trump's proposal was to reduce the amount of money given to lower-income families to help buy groceries and instead send food directly to them. Currently, roughly 41 million people in America are considered food insecure, lacking reliable access to affordable, nutritious foods. A study by the Urban Institute found that SNAP is the sole food source for 8.5 million American families.

The proposal to cut SNAP's budget by 30 percent, when the program is already underfunded, targets low-income families directly. The idea of giving them a pre-assigned box falls into a level of paternalism that the program has not seen before. As reported by Newsweek, Joel Berg, CEO of Hunger Free America, predicted, "People will starve, we'll see Great Depression-like conditions."

Right now, the struggle for low-income families is tough, and cutting programs won't help anyone. It's important to remember that no one deserves to be unable to afford basic necessities and targeting the already vulnerable is one of the worse things a president could do.