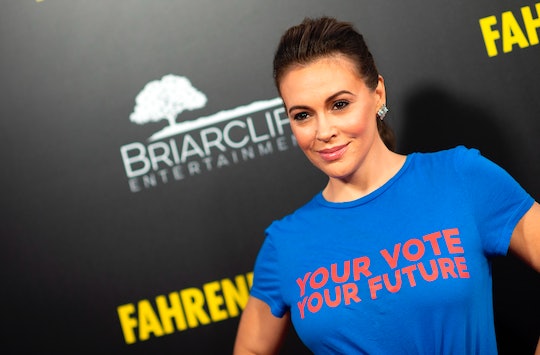 As the 2020 presidential election nears, Alyssa Milano wants people to remember that political engagement can, and should, be joyful. "We’ve been so bogged down for the past few years, and rightfully so," the actress and activist says. "But we have to find joy... Because they can never take that away." While sharing this insight, Milano also urged fellow mothers to vote and encouraged others to do so as well at an online event hosted by Moms for Biden and Joe Mamas, grassroots campaigns working to get Democratic nominee Joe Biden elected and defeat President Donald Trump.

At the Aug. 25 event, Milano was joined by moderator Jamie Green, Coalition Project Director for Biden for President; Julie Zebrak, founder of Joe Mamas; and Tovah Kopan of Lawyer Moms Action, a nonpartisan organization advocating for the legal and political rights of marginalized children and families which just that day announced their endorsement of Biden for president. The women acknowledged that it can be hard for mothers to get involved in campaigning and activism; it’s not like most moms have an enormous surplus of time leftover after family, work, and the three hours of sleep we manage per night.

For Zebrak and Kopan, however, motherhood is an identity integral to their political engagement. Lawyer Moms Action was formed by five lawyers who are also mothers, though membership now includes folks who are neither, to fight separations of immigrant families at the southern border. "As moms, we can’t look away," says Kopan.

Milano, who's been involved in activism since she was a teen, says she finds her children — Milo, 8 and Elizabella, 5 — give her a fresh perspective on the issues and bring them back to a "human level." At the event, she recalled a day-long protest she attended in support of Dreamers, recipients of the Deferred Action For Childhood Arrivals policy. "When I got home [my son] put his little hands on either side of my face and said 'Did we win, mama? Do the Dreamers get to stay home?'" Putting things in such simple terms, outside of the political rhetoric or red or blue, helps her focus on what really matters: our shared humanity.

The bonds Milano has built with other moms have also given her a new outlet to organize and connect. Quoting Liberian activist Leymah Gbowee, Milano reminded moms in attendance that "when women gather, great things will happen."

Milano says she makes sure to take an hour a week to "get messy" with her mom friends (online these days, #ThanksCoronavirus) about one particular issue, from criminal justice reform to immigration. "Sometimes it’s four moms, sometimes it’s 25," she says, noting that no matter the size of one’s circle, there’s an opportunity to influence, persuade, and work together to make a difference in the world.

But the best way to do that, according to Milano, is voting and encouraging others to do the same. Her fellow panelists could not agree more. "We have to disabuse people of the notion that their one vote doesn’t matter," says Zebrak. While Milano acknowledges the very real challenge of voter suppression, she nevertheless believes that "voting is how we protect each other."

An earlier version of this article misattributed Ms. Zebrak's comment to Ms. Milano and has been updated.