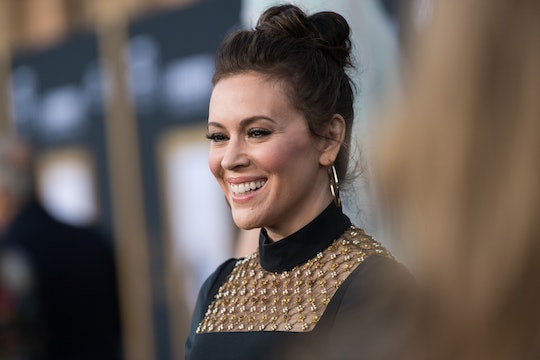 Alyssa Milano Shares Her Abortion Story: "It Was Absolutely The Right Choice For Me"

While speaking out against a recent wave of restrictive anti-choice laws and legislation, actress Alyssa Milano opened up about abortions she had more than 25 years ago. In the most recent episode of her podcast, Alyssa Milano: Sorry Not Sorry, the activist shared with her listeners that she'd had two abortions in 1993. "I'm Alyssa Milano and I've had an abortion," Milano said in the opening moments of her podcast. "I control my own body."

Milano, now a 46-year-old mother of two, said on her podcast she had two abortions after getting pregnant while on the pill in her early 20s. "In 1993 I had two abortions," Milano said. "I was on the pill, taking birth control because I knew I was not ready to be a parent. I had finished working on Who's the Boss and I was starting to work on films and other projects and my career and my life were in front of me and I was living them as fully as I could."

Despite being on birth control, Milano said she still got pregnant. Further complicating matters was the fact that Milano was also taking Accutane, an acne medication the U.S. Food and Drug Administration (FDA) warns has an extremely high risk of causing severe birth defects if taken for any period of time during pregnancy. "I knew this, so using birth control was a doubly important decision for me," Milano said in reference to the health risks associated with Accutane.

"It was devastating," Milano said of learning she was pregnant just as her career began to take off. Ultimately, however, the actor said she knew she personally wasn't ready to become a parent at that time. "I knew at that time, I was not equipped to be a mother, and so I chose to have an abortion. I chose. It was my choice. And it was absolutely the right choice for me."

Still, Milano, who noted that she was raised in the Catholic faith, said the choice to have an abortion didn't come easy for her. "It was not an easy choice. It was not something I wanted, but it was something that I needed, like most health care is."

The actor went on to explain that, following her abortion, she remained on the pill and in a consensual sexual relationship with a partner she opted not identify by name. "I refuse to let anyone else's bullsh*t morality force me into a life of premarital celibacy," she said, adding that she does not subscribe to the narrative that sexual pleasure is reserved for men. "Nobody will say that he was at fault for enjoying sex with me, but you can be damned sure that the men enacting these [anti-choice] laws think less of me for deriving the same pleasure from him," she added.

Planned Parenthood notes that the pill is only 99 percent effective if used absolutely perfectly. But because people are rarely perfect and it can be easy to take a pill late, miss it completely, or forget that certain medications can impact the pill's effectiveness, Planned Parenthood argues that the pill is likely closer to 91 percent effective. "That means about 9 out of 100 pill users get pregnant each year," the health care provider notes on its website.

While Milano said she wasn't in a place to have children in 1993, she welcomed her first child in 2011, followed by her second in 2014. In the most recent episode of her podcast, Milano said the recent attack on women's reproductive rights and bodily autonomy have caused her to reflect on all she would have lost had she been forced to carry out her unwanted pregnancies. "I would not have my children — my beautiful, perfect, loving, kind and inquisitive children — who have a mother who was so very, very ready for them," she said. "I would not have my career. I would not have the ability or platform I use to fight against oppression with all my heart. I would never have met my amazing husband, David, whose steadfast and immeasurable love for me sustains me through these terrifying times."

Ultimately, Milano argued that her life would be "completely lacking all its great joys" had she been denied access to a safe and legal abortion. "I would never had been free to be myself — and that's what this fight is all about: freedom," she said. "Freedom for women to live the life they were meant to have, not just the life that is thrust upon them by a pregnancy that cannot exist in their life."

More Like This
Jodie Turner-Smith Opens Up About Being Secretly Married & Pregnant
Meghan Markle Wore Lilibet On Her Chest As She Fed Chickens At Their California Home
Elon Musk Shares New Photos Of Son, X, With His Own Twitter Badge
Mariah Carey Says She Has Never Called Herself The “Queen Of Christmas”