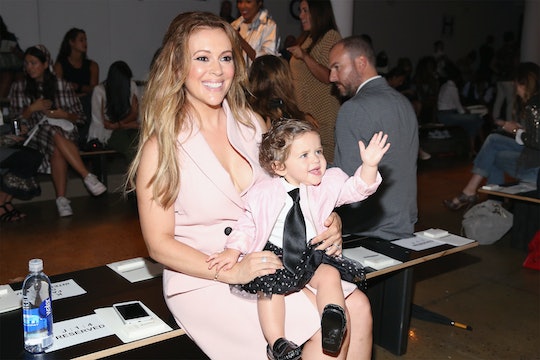 A former Charmed star has become the newest celebrity breastfeeding advocate and educator. I'm talking about Alyssa Milano and Milano's best quotes on breastfeeding, because the actress, and mom to Isabella, 16 months, and Milo, 4, has become more adamant about a woman's right to breastfeed in public than anyone before. Whether she's whipping them out on The Wendy Williams Show (her breasts, that is), or posting candid photos of herself breastfeeding her little ones on social media (my favorite photo by far is the one the actress took while dressed as Wonder Woman on Halloween, breastfeeding baby Isabella), Milano is not shy about letting the world know she thinks society is archaic about breastfeeding. And she wants that to change.

Breastfeeding in public continues to be a controversial topic. Why? I guess people don't want to see nipples ... er, rather, women's nipples, because for some reason, men's nipples just aren't considered indecent. And come on, people. We are a civilized nation. But Milano, 43, is just fine with speaking out for a mother's right to breastfeed wherever and whenever she wants. In fact, she's happy to take on this newest role, and has done so by speaking out publicly (and boldly) about breastfeeding in today's cultural climate.

Here are a few of her very best quotes (so far... because you know, there are bound to be more in the next few months):

When She Called Out Breastfeeding Haters As "Archaic"

Forget sleep, when you're breastfeeding, you're simply not on a normal routine. Milano gets that. In an interview this week, she insisted, "If I could make life a little easier for a breastfeeding mother, I think that's important."

When She Pointed Out Society's Hypocrisy

"But biologically, they're not made for sexual things," Milano said to Wendy Williams in a heated debate about breastfeeding on Jan. 6's episode of The Wendy Williams show. "That's what we've done to them."

When She Reminded Us What Breasts Were Actually For

"It's the most natural thing you can do for your child," Milano said in that same Wendy Williams interview. ... Honestly, would you like to be denied food because it made someone else uncomfortable? That's just rude.

When She Said It Was Time To End Breastfeeding Shame

In her interview with E!, the actress demanded an end to feeling embarrassed about breastfeeding in public. "We should be able to do it everywhere." Preach.

When She Argued That Breasts Were More Than Fun Bags

"People can't see past them breasts being boobies, or titties, or whatever you want to call them," said Milano in her Huff Post Live interview on Jan. 7. Seriously. How old are we?

...And When She Reminded Us That We Wouldn't Want To Eat Under A Blanket

"But would you eat under a blanket?" Milano said in her sit-down with Williams this week — and she's got a point, because clearly, it's not considered civilized behavior for adults to eat beneath the sheets, so why should breastfeeding infants eat under a blanket either?

Breastfeeding advocacy isn't the first motherhood cause the actress has taken on in recent days. She's also spoken out on the uncool and sexist expectations of women to lose postpartum baby weight, and how gross it is that people think they have the right to criticize women who don't get their pre-baby body back in record time. Who's the boss, people? Milano is.