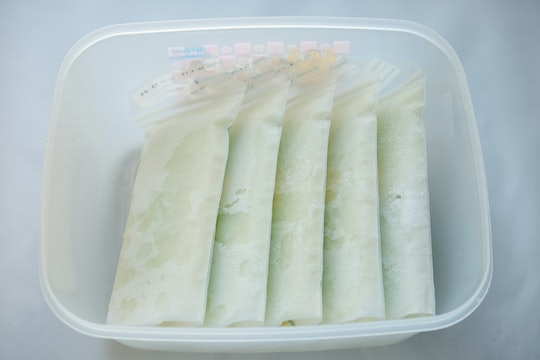 Here's What Storing Your Breast Milk Can Do To It, According To Experts

Sometimes you feel like you just can't win when you're a parent. You've carried a baby all those months, successfully brought them into this world, and now you've somehow managed to keep them fed. You know, with milk that comes out of your own body. But if you're pumping and trying to keep up that milk supply, you might be receiving conflicting information about what you're actually supposed to do with all that milk. So if you've Googled, "Am I supposed to store breast milk?" recently, know your internet search isn't as ridiculous as it seems. After all, some people have probably told you to freeze your milk for a rainy day, while others might have said storing your "liquid gold" is a waste, and to, instead, use formula when necessary. So, what's a hardworking, breastfeeding, pumping mom to do?

When it comes to the formula versus breastfeeding question, the American Academy of Pediatric's (AAP) still firmly recommends breastfeeding for about the first six months of a baby's life. Of course, always feeding your baby breast milk from the breast isn't an option for all mothers, which is why the electric pump is such a helpful tool. Since the 2010 "Break Time for Nursing Mother's" law went into effect, more working women have felt empowered to pump at work and to demand private spaces (that are not bathrooms, FYI) to do so when needed. Just because the law is in place doesn't mean all business abide by it, though, or make things super easy for pumping moms. Plus, the storing of that pumped milk can get kind of tricky if not, at the very least, inconvenient.

A study published years ago in the U.S. National Library of Medicine's National Institute of Health (NCBI), found that expressed breast milk should not be stored for more than 24 hours in a refrigerator (assuming the temperature there is 4 to 10 degrees C). At room temperature, they concluded that breast milk could last up to eight hours (15 to 27 degrees C), and four hours at warmer temperatures (30 to 38 degrees C). The study did not recommend short-term freezer storage, because of the hazards the thawing process of breast milk can present. Another study published in the Journal of Pediatrics concluded that the longest you would want to store breast milk in the freezer is nine months.

The problem with storing breast milk isn't the act of storing the milk itself, but in the multiple things that could go wrong if you don't follow proper storage guidelines. Thankfully, the Mayo Clinic has some recommendations for breastfeeding mothers on show to safely store breast milk. First, the clinic advises that you wash your hands before expressing or handling any breast milk or storage containers. Two, do not use any household baggies or disposable bottle liners (rookie move) for storing milk. Three, do not add warm breast milk to frozen milk because it would cause the frozen milk to partially thaw. (You can go to the Mayo Clinic's website for complete guidelines and directions.) Some other breast milk storage "don'ts" include not heating frozen milk in a microwave, or re-freezing milk that's already been defrosted.

If you have trouble pumping a full day's worth of milk, or if you do not get enough breaks to pump (shame on your boss, by the way), you may have to give your baby formula. As an article in The New York Times points out, there are the risks that formula feeding could lower the baby's need for breast milk and decrease your own milk supply. Depending on how strongly you feel about exclusively breastfeeding, you may want to keep the aforementioned in mind.

But given the risks associated with improper storage and defrosting of frozen breast milk, would it just be better to give your baby formula when you're not there to breastfeed them? Should you consider pumping simply as a way to maintain your milk supply? For example, and according to the Mayo Clinic, there is research that suggests that the longer breast milk is stored in the refrigerator or freezer, the greater the loss of Vitamin C in the milk. Then again, so what?

Experts say that even frozen breast milk wins out over fresh formula. As stated on the the National Health Services' site, "Breast milk that's been frozen is still good for your baby and better than formula milk." Also, there is no loss in nutritional value after breast milk has been frozen. In a study published in the NCBI's website, researchers found that, "scientific evidence in relation to the loss of nutritional quality during freezing is rare."

When it comes to whether you should store your hard-earned milk, the answer is a resounding yes. Just make sure you're following safe storage and defrosting/milk prep practices. If storing isn't an option due to your place of work, or other factors, you will have to supplement with formula (which is great, too). Remember, just because breast milk is technically "better" for baby, doesn't mean that formula is "bad." It is always best to do what feels right for you and whatever fits into your schedule, because what works for you is usually what's best for baby.

More Like This
Banana Boat Sunscreen Has Recalled Products That Were Found To Contain Benzene
How To Avoid & Treat Lyme Disease
Everything Parents Need To Know About Monkeypox
How Hot Is Too Hot For Babies? Experts Weigh In