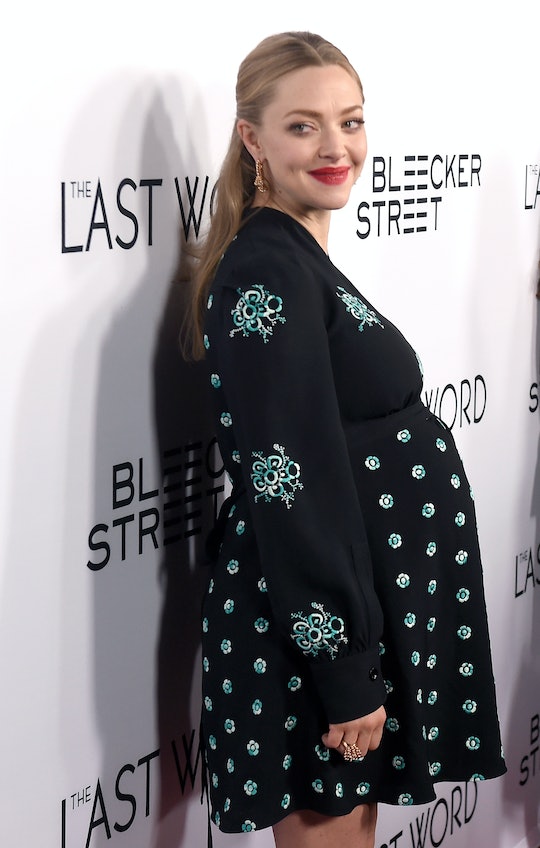 Amanda Seyfried Has Always Wanted To Be A Mom

Unlike her notorious character in Mean Girls, Amanda Seyfried certainly doesn't need any help spelling orange. The actress, wife, and mother has been extremely vocal in her articulate political opinions, as well as her views on a number of issues, and it's clear that Seyfried is well-informed, well-spoken, and passionate about learning. And as a new mom to a precious little girl, Seyfried is bringing her wisdom to the parenthood game with her own totally real and 100 percent relatable words. As someone who's previously expressed an intense desire to become a parent, she's basically been practicing for motherhood for years, and these comments and tweets from Seyfried about parenting and motherhood prove as much.

It was less than a week ago when Thomas Sadoski announced to Late Late Show host James Corden that the couple had gotten married, eloping just days before the birth of their daughter. Since then, it seems as though the two have been completely entrenched in utter happiness and joy.

While Seyfried has remained relatively quiet about her new role as a wife and mother, comments, tweets, and Instagram posts she's posted and made in the past shed an important light onto her thoughts about motherhood. And even though the actress may lead a more glamorous life than most of us will ever know, these comments prove that she's just as down to earth as anyone could hope, and she's facing this new motherhood thing with confidence, humor, and willpower.

On Her Excitement About Kids

In an interview with Vogue Australia for its February 2017 issue, Seyfried said, "I've never been excited by anything more in my life. And ready." Given how long Seyfried has been talking about having kids, that's definitely understandable. And hey — if she's been talking about it this long, she's probably more than ready to take on all the challenges parenting will bring.

On Her New Family Plan

"I'd like to have one in the next four or five years," Seyfried told E! news back in June 2015. "And the second one can happen between 35 and 40. Or I can adopt... It's fine. I definitely want to a couple kids." Seyfried added that she didn't stop there though — she had much more planned in the way of her kid's futures. "I want to have kids. And I want them to go to local schools, and there are some really good schools around here," she told E!. "I would like my life to be the same as it is now, but with a little less stress and a little less work."

On All The New Talents Pregnancy Brings

Moms might be superheroes, but pregnant women are pretty powerful too. In an interview with Refinery 29 in December, Seyfried joked "I swear to god I can smell the TV. There’s this static-y, metal-y scent. Do you know what I’m talking about?" While there may or may not be science to back up that claim, it's pretty much a guarantee that there are at least a handful of other pregnant women out there who can relate, no?

She Isn't Afraid To Say What She Wants

"I keep feeling like my eggs are dying off," Seyfried told Marie Claire U.K. in 2015. "I need to get on it… I want a child. Badly. I want to be a mother, badly. That's what I feel. I've been feeling it for like, two years. I'm not ready but nobody's ready. It changes everything… so how you can ever be ready for that?" Truth.

On The Nature Of Motherhood

Motherhood isn't for everyone, of course. But for some, it having kids is just the next natural step in life, after all the other boring adult stuff has been accomplished. "I think it’s an important chapter," Seyfried told Us Weekly back in March 2015. "There are some people who just know innately what they are, what they’re capable of. Yeah, it seems natural."

Seyfried has been waiting for this moment for a while now. And given her excitement, it's definitely safe to assume she's going to rock motherhood. Four for you, Amanda. You go, Amanda.