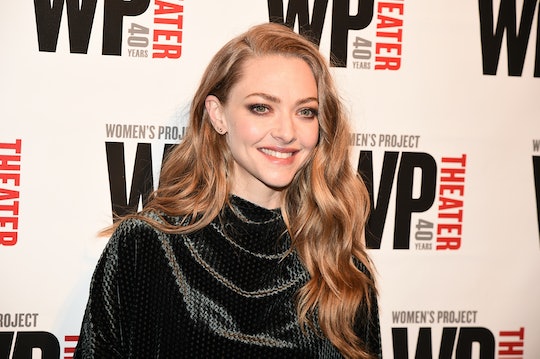 Breastfeeding is no walk in the park. Sometimes you're not producing enough milk, the baby won't latch on, and it can be seriously painful. So when celeb moms speak up about those difficulties, it definitely helps other mamas feel like they're not alone. And recently, actress Amanda Seyfried got candid about breastfeeding and how "incredibly hard" it can be in a candid interview with Us Weekly. Indeed, moms everywhere will appreciate the Mamma Mia! star's honesty, especially considering how common this struggle is.

Seyfried — who gave birth to her first child, a daughter named Nina, in 2017, according to E! News — told Us Weekly breastfeeding sometimes left her feeling "desperate," adding that "until recently," it felt like it was "a hidden, closeted thing."

"Breastfeeding is incredibly hard. If you don't find it hard, you are rare. A rare, lucky person," Seyfried recently told Us Weekly. "I feel like we're all talking about it, but not enough still."

Now, Seyfried — who's married to actor Thomas Sadoski, according to People — has taken to doling out breastfeeding advice when she can, telling Us Weekly she "love[s] giving advice" on the subject. In fact, as the Daily Mail previously reported, she even recently came to the aid of actress Claire Holt, who got candid about her own frustrations with breastfeeding on Instagram earlier this month.

In a comment on Holt's post in which the Australian actress said she was "exhausted, in pain, feeling defeated" after "struggling through a tough feed," Seyfried wrote:

I gave myself two days off in the first week so I wouldn't be scared and sad every time she woke up to feed. And it helped so much. No guilt. Just pump and bottle. And then did both throughout. Less pressure. You're not alone.

Seyfried has long been an advocate for breaking the stigma surrounding breastfeeding since giving birth, whether it's encouraging more people to talk about it, getting rid of mom guilt surrounding bottle use, or speaking candidly about how it's OK to use formula.

In a July 2017 tweet, for instance, she slammed anyone judging mothers for how or what they feed their babies, according to HelloGiggles. "Breastfeeding is awesome. Formula is awesome. Feeding your baby is awesome. Not awesome? Judgement," Seyfried tweeted at the time.

The positive message received similarly positive feedback from moms who had been on the receiving end of some mom shame. One mom responded to the tweet, revealing that she'd never been able to breastfeed because of medications she was taking, adding, "but who cares. As long as my girl is smiling and healthy."

Seyfried welcomed her daughter with Sadoski in March 2017, according to E! News, and prior to revealing her pregnancy, the actress had been open about how badly she wanted a child. She told Marie Claire UK in 2015, "I want a child. Badly. I want to be a mother, badly."

And ever since she welcomed her baby girl, Seyfried has been rocking motherhood and making other moms feel less alone at the same time. I look forward to her honest posts and interviews on the subject, as do many other moms.

More Like This
Kylie Jenner Is Unbothered By A Little Breast Milk Leaking On Her T-Shirt
Amanda Seyfried Tells Her Daughter To Go To Bed After Emmys Win
There’s A Reason Your Baby Always Falls Asleep While Breastfeeding
If Breastfeeding Makes You Tired, Here’s How To Keep Your Energy Up