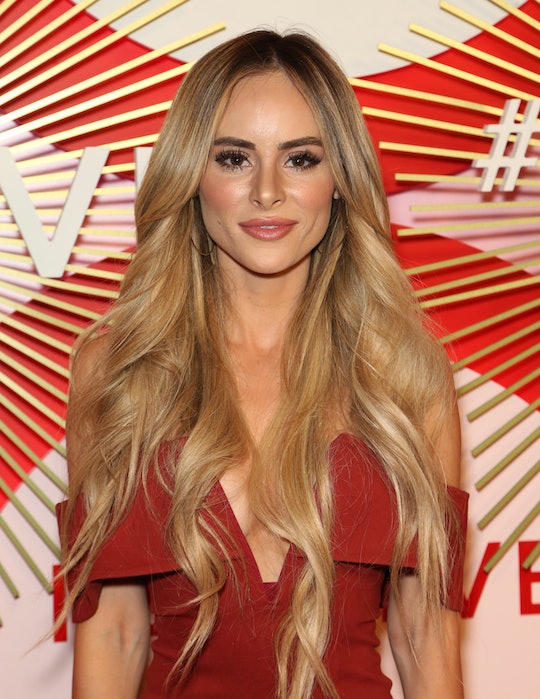 Whether or not they actually have kids of their own, it seems like everyone has an opinion when it comes to parenting. And in this day and age, complete strangers aren't shy about criticizing the decisions of other parents — especially when it comes to celebrities. Because of their fame and relatively large social media following, celebs are often on the receiving end of harsh commentary about all things kid-related. But that doesn't mean they have to take this abuse in silence. Recently, Amanda Stanton responded to people who shamed her for her daughter's highlights. And her reaction is priceless.

The former Bachelor star was at a hair salon with her daughter, Kinsley, on Sunday, Jan. 27, according to Us Weekly. Stanton apparently polled her followers, asking if she should let her first-grade daughter get highlights via Instagram Stories. "How can I say no to this face?" she wrote, according to the publication. Another post showed Kinsley being the "best assistant ever" while her mama got her hair dyed. However, the next photo showed the youngster with foils in her hair — followed by a mother-daughter photo of their finished looks. "Babe's first highlights," Stanton captioned the snap.

As Us Weekly reported, one follower commented on the photo, asking why Stanton had bothered to do a poll if she was just going to disregard followers' input. "Because I value your guys’ opinion and do like to hear what you guys have to say … but ultimately it’s my decision regardless of whatever wins the poll," she answered. (A-freaking-men!)

First grade kid who behaves like a teen and has the attitude of a spoilt teenage brat. Not gonna play out so well once she’s older and you realize she’s outta control. Not going to tell you how to parent your child but it’s sad to see how much of their childhood their missing because they’re busy trying to act older and are being encouraged to do it. Sad.

(Is this person for real? It's just hair!)

Later on in her Instagram Story, Stanton again addressed the topic, according to OK! magazine — and promptly took down the shamers. "When I posted the poll about getting Kin’s hair (HARDLY) highlighted, I knew it would trigger the trolls. But I did it anyway… so in a way I was trolling the trolls," the mama bear wrote. "Of course I got some messages saying she’s too young etc.… but I got a lot more saying 'I’m so glad you let her and didn’t care what anyone negative had to say.'"

As ET Online reported, this isn't Stanton's first rodeo with mom shaming. Back in 2017, she experienced backlash from trolls who accused her of not spending enough time with her children — after she joined the cast of the fourth season of Bachelor in Paradise. "As far as Bachelor in Paradise goes, it doesn’t film for very long at all," she wrote on Instagram. "I know it airs for 2 months… but it actually takes a lot less than that to film it. And alllllll the other days, weeks, months of the year, I am with [my kids]! I am fortunate enough to be able to work from home and spend more time with my kids than most parents. My kids are my entire world. I am doing my best to give them a great life."

Although I don't have notable experience with mom-shaming, I'd like to think my tactic for dealing with trolls would be similar to Stanton's. She confidently and effectively puts haters in their place — and in my opinion, she deserves all the applause for her level-headed reactions. Granted, it doesn't stop trolls from chiming in with unsolicited opinions in the future. But Stanton doesn't take the abuse lying down. And honestly, no parent should have to.