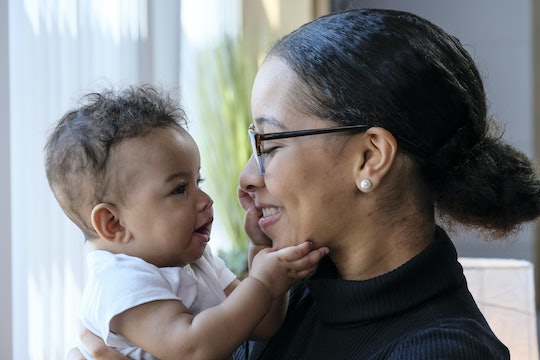 Lullabies Actually Help Your Baby "Sync" With You, According To Science

It seems like common sense that singing to a baby is soothing, but a new study aims to explain the science behind it. Lauren Cirelli, a Postdoctoral Fellow at University of Toronto Mississauga, asked mothers to sing to their children while being monitored, and found that babies sync with their moms during lullabies, according to ABC News. Moms were asked to sing "Twinkle, Twinkle, Little Star" to their infants in two different manners, both "playful" and "soothing." The babies' behavior was monitored during the study, and their brain arousal was measured with a device placed on the skin that detects sweat gland activity (sweating increased with stress or excitement).

When moms sang in a soothing manner, that is, slowly and at a lower pitch, both moms and babies had a lower level of brain arousal. But when they sang the same song faster and higher, or playfully, arousal levels remained stable for both, and babies appeared happier and more attentive to their mothers. Cirelli told ABC that she believes infants "must be able to track auditory events to make sense of music," and suggests that early exposure to music may help babies learn how to engage with others socially and emotionally.

This was a small study of 30 mother-baby pairs, but it's not the first of its kind to come to a similar conclusion. A 2017 Harvard doctoral dissertation by Samuel A. Mehr also suggests a social function for music. For his study, Mehr introduced babies to new songs via three different methods: having their parents sing to them, having a stranger sing to them, or playing a recording. He found that five-month-old infants responded positively to strangers when they sang a song the babies had previously learned from their parents, while hearing a song they'd learned from a recording or another stranger did not produce the same results. Eleven-month-old babies were more likely to reach for an object offered by a stranger who sang a song their parents had previously sung them, as well.

As for the calming babies, Université de Montréal doctoral candidate Marieve Corbeil argues that music is better than spoken words, even if the song is completely unfamiliar to them. She played Canadian babies three different recordings of a Turkish children's song: one version sung, one was spoken "in a lively, infant-directed manner," and the third was spoken in a "neutral, adult-directed manner," according to EdWeek. Infants were entertained by the singing for twice as long as either spoken-word version of the song. She believes that the steady beat and repetition of music may be more reassuring to babies than spoken language, which is more unpredictable.

And lullabies aren't only helpful for getting a baby to go to sleep; they can actually make them feel better when they're sick, too. A 2013 British study found that babies experienced lower heart rates, less anxiety, and reduced perception of pain after parents sang them lullabies, according to the NHS. Dr. Nick Pickett conducted the study of 37 pediatric hospital patients suffering from cardiac and/or respiratory conditions, between the seven days old and four years old. He had parents sing to them, read to them, or not interact at all. He found that hearing lullabies reduced the average participant's heart rate from 134.1 to 128.7, and their pain perception scores, as determined by the Children's Hospital of Eastern Ontario Pain Scale, dropped from an average of 6.21 to 5.64.

Pickett also stressed that hearing these songs from their parents was what mattered, so don't think that a mobile will have the same magic effect as mom:

Babies and young children respond to the singer's voice first and instruments second — and more than one instrument can actually become quite confusing and less effective. Facial expressions and visual stimulation during the performance of a lullaby are just as important, and live performance allows the adult to adapt their singing depending on the child's mood.

If you're self-conscious about your voice, don't worry. All babies really care about is the familiarity of the song, the tone its sung in, and of course, the fact that it's coming from you.

More Like This
Does The FDA's Plan To Limit Lead In Baby Food Go Far Enough?
Why Does My Newborn Shake Sometimes? A Pediatrician Explains
Doctors Swallowed LEGOS To Prove Everything Is Awesome For Kids Who Do The Same
Adam Levine & Behati Prinsloo Welcome Their Third Baby & This Is Where It Gets Real
What Parents Are Talking About — Delivered Straight To Your Inbox