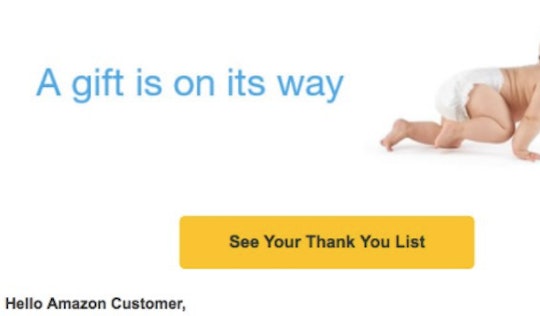 Amazon Accidentally Emailed Women About Baby Registries They Don't Have, & People Are Not. Pleased.

Hearing that a surprise gift is on the way might be cause for joy to some, but this wasn't quite the case for many online shoppers on Tuesday afternoon. Frustratingly, Amazon accidentally emailed women about baby registries that never existed, and people are pretty annoyed for a few (understandable) reasons.

Romper reached out to Amazon for comment on the reports and a spokesperson replied with the following statement:

We are notifying affected customers. A technical glitch caused us to inadvertently send a gift alert e-mail earlier today. We apologize for any confusion this may have caused.

As reported by BuzzFeed, "Hello Amazon Customer," the erroneous emails read. "Someone great recently purchased a gift from your baby registry!" The article on the situation revealed that, when the link in the email is clicked from a smart phone, users are led to the Amazon app where's they're invited to start a baby registry. One user who does have an Amazon baby registry reported that clicking on the email's link just sent her to a blank page. In response, The Verge recommends that users delete the emails, and avoid clicking on them altogether, despite any curiosity that might threaten to take over.

The series of misleading messages is concerning Amazon customers who wonder if their accounts are secure or if they have somehow been subjected to something more sinister, like a phishing attack. Others were wondering if this situation is anything like 2012's revelation where Target called out pregnancies in teen users based on their purchase history, even before the users had told anyone that they were expecting, according to The New York Times. It's deeply concerning for those wondering if online companies have undue access to their information, and what they might do with said info.

Still, Twitter users were quick to shout out that many of them are not pregnant, nor are they planning on it:

Given the series of baffled Twitter responses, it appears that the email didn't discriminate between age or gender, suggesting that the messages had no discretion to them and weren't targeted to any specific type of shopper based on their shopping history. Despite this security, the emails were a bit more hurtful to others, namely women who would like to have baby registries:

According to TIME, "Amazon's customer support Twitter account said that any suspicious emails should be sent to [Amazon]" for review, which had many speculating, then, that the emails might not have been Amazon's doing but were instead sent from a fake source. “It was sent by us but was sent to customers as an error. It’s not a scam, but if you don’t have baby registry please disregard the email,” a customer service rep shared on the Amazon shopping app.

Now that the situation is more or less cleared up, it might be time for some reparations on Amazon's behalf. Perhaps an apology email is in order? Or at the very least an explanation of how and why the perplexing emails were sent out? "I have no baby registry on @amazon or @amazonregistry. No one sent a gift. Did IVF w/ had two miscarriages. This is salt on the wound," wrote Twitter user Julia Claire. "How about getting the Amazon baby registry email WHILE WATCHING A CLEARBLUE COMMERCIAL while ordering IVF meds?" replied another frustrated user.

Though the statement provided to Romper indicated that the affected parties had been contacted, as of Tuesday night, many claimed that they hadn't received anything from the company. While the root of the mistake hasn't yet been shared, consumers are hurt by the error. Registering for baby gifts is a dream some women haven't yet experienced, and the rogue messages just added insult to injury.