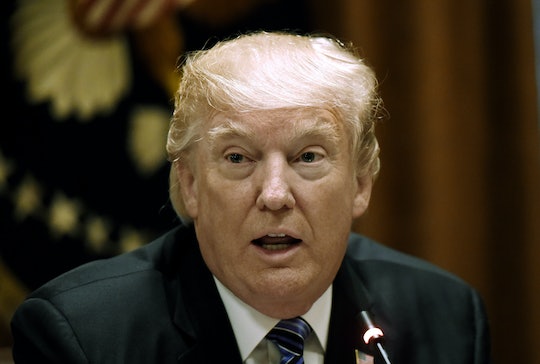 If you hate President Donald Trump's tweets but just can't look away from them, don't worry: I've found the perfect solution for you. Amazon is selling toilet paper rolls with Trump's tweets on them now, and the internet is here for it in a major way. In fact, the toilet paper is so popular that the manufacturer sold out of their infamous rolls this morning, and it's now working hard to get more tweet-covered TP into the hands of customers.

At $9.99 a roll, Toilet Tweets' POTUS 45 Classic Tweet Paper is certainly a little pricier than your usual two-ply from the corner store is. However, the "most flushable" toilet paper is clearly a superior product. Just take a look at its description on Toilet Tweets' website:

No twitter feed is as deserving of being flushed, it's tremendous. I'm hearing other toilet papers don't even have words on them, SAD! This toilet paper has the best words.

According to a tweet by the company, Toilet Tweets sold out of the toilet paper rolls by Friday morning. However, a new shipment is already en route to Amazon, and the product should be available again in a short matter of days. And judging by the reaction from Twitter users, that second shipment will probably sell out relatively quickly as well.

People also poked fun at the president's tweets (and, ahem, administration) in their Amazon reviews of the toilet paper. "I was going to order this but was concerned about lack of absorbency and that it may lead to leaks," one Amazon user, LSM, wrote on Friday.

"Many people told me this was the greatest invention in the history of ever and boy were they right," another Amazon user wrote. "As the most important person in the world, it is great to see Trump's Toilet Tweets (TM) getting the recognition they deserve."

Romper reached out to the White House for comment on the product, but did not hear back immediately. So far, Trump has not tweeted about the product.

Interested in obtaining your own roll of presidential tweet-covered toilet paper? You can find Toilet Tweets' Trump-themed toilet paper rolls on both Shopify and Amazon. (If you purchase the toilet paper rolls, please let me know if they contain the infamous "covfefe" tweet or not. Inquiring minds want to know.)

If you're not willing to wait until the toilet paper rolls are back in stock, don't worry. There's plenty of other Trump-themed, bathroom-related merchandise available online, including a roll full of the president's top quotes and a simple roll that features only his face. Happy shopping!