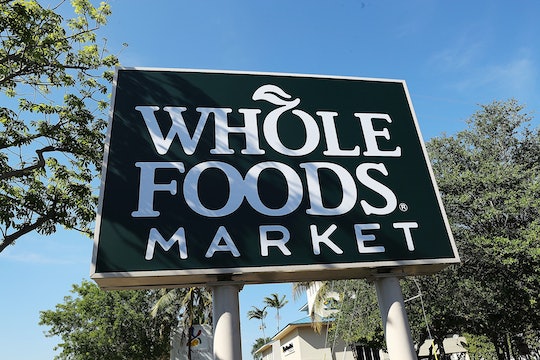 This year, Prime Day seems to have taken on a life of its own. Amazon has started sales early, expanded it to two full days, and the discounts are going to be deeper than ever. That is all fantastic, but many of us were wondering what Amazon Prime Day at Whole Foods would look like since the retailer mega giant took over the grocery store chain not long ago. Now, we finally have an idea of the deals that are going to go down, and to be honest, they're pretty exciting.

Whole Foods devotees can tell you that the Prime deals are usually pretty great. This year for Prime Day, Amazon is taking out all of the stops. And it's already started. The most significant deal is that Prime members who spend $10 at Whole Foods from July 3 through July 16 will receive a $10 Amazon credit to use on Prime Day. That is free money. If you stack that with what's already on sale for Prime members, you're going to come out so far ahead, you won't even believe you were shopping at Whole Foods.

Some of the sales are regionally-priced, as one might expect. For instance, on Friday, July 12, pizza slices will be two for $5, but higher in Hawaii. Also, there are sales specific to New York and New Jersey. (Because apparently, pizza by the pound is only a thing here.) That being said, the majority of sales are company wide and begin on July 10, with a buy one, get one free sale on Abe's mini muffins. (Might I suggest the Devil's Food Flavor muffin, crumbled over a mound of Ben and Jerry's non dairy Cherry Garcia flavor, with a heavy hand of walnuts on top?)

The rest of the sales are also pretty exciting. Whole Foods and Amazon noted in a press release that on Thursday, July 11, there will be 25 percent off Chef’s Case entrees, sides, salads, and Chef’s Plates. Friday has the aforementioned pizza deal, and on Saturday, July 13 you'll be ready to kick back and take it easy with $2 off the cost of their signature rotisserie chicken.

Sunday is the day when many of us meal prep, so it's fitting that on Sunday, July 14, the sale is 20 percent off per pound of Whole Foods sliced-in-house deli meats and cheese. If you have kids, this is the deal to go for in the summer when you're trying to get some work done, and don't have time to screw with lunches. If you have everything you need to make a snack tray, it can absolutely double as a meal if you add extra fruit.

On Monday, July 15, you'll want to mosey on by the Whole Foods after you've had supper and take advantage of their buy one get one free deal on butter cookies, and on Tuesday, July 16, it's 50 percent off of chocolate or butter mini croissants. Pro tip: those mini butter croissants make the perfect little sandwich rolls for parties. Yet another reason to get plenty of deli meat and cheese earlier in the week. If you're feeling really exciting, take the leftovers of the rotisserie chicken, add in some mayonnaise, chopped onion, paprika, salt, curry powder hard boiled egg yolk, and some freshly chopped cilantro, and make a yummy curried chicken salad to top those mini croissants. They are always a huge party hit.

As for the chocolate croissants, if you forget about them, and they end up a little stale? Make a bread pudding out of them. I promise, you won't regret it. Just like there's no way you'll regret shopping Amazon Prime Day at Whole Foods, because, honestly, most of us have stretched grocery budgets as it is. We may as well take advantage.