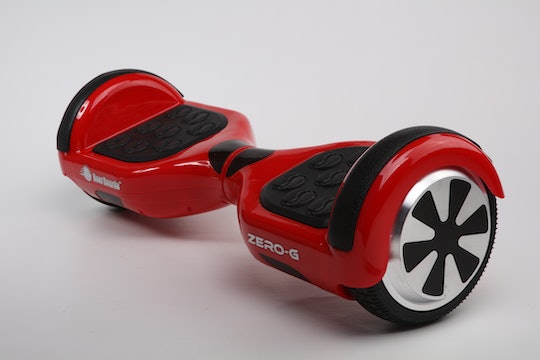 The hottest holiday gift of the year isn’t eligible for Prime two-day shipping: amid allegations that Swagway “hoverboards” are catching fire, Amazon has pulled them from its site. In a statement to Mashable, a Swagway spokesperson said that Amazon had requested that the company provide documentation proving that its product is compliant with safety standards relating to their batteries and chargers. Swagway maintains that they do meet these safety standards, and they’re “happy that Amazon has decided to take steps to weed out the low quality boards,” which seems to imply that Swagway blames its competitors for the bad press.

Searching for “Swagway” on Amazon currently yields results for other brands, such as Jetson, Hover X, and Razor. Romper reached out to both Swagway and Amazon for comment but did not immediately hear back.

Last week, three major U.S. airlines – Delta, United, and American – announced that they’ll no longer allow “hoverboards” on flights because of safety concerns about the products’ batteries. According to CNN, there are federal regulations limiting the types of batteries allowed on planes due to the risk of combustion, and some “hoverboard” manufacturers allegedly don't disclose adequate information about their batteries.

Overstock has ceased sales of all “hoverboards,” and U.K. safety officials recently seized 15,000 “hoverboards” imported into the country because of concerns that the products could overheat, explode, or catch fire. Here in the U.S., the Consumer Product Safety Commission has received reports of 10 “hoverboard” fires, and has launched an investigation.

Although they don't really hover, that hasn't stopped customers from snapping up the product so far; USA Today recently called "hoverboards" the "hottest, hardest-to-get gift" of the 2015 holiday season, which is impressive, given that they average a $500 price tag.

Celebs have been on Team "Hoverboard" since their launch; Wiz Khalifa was busted for riding one in an airport in August, and they recently showed up in Missy Elliott's amazingly weird new video, "WTF." But beware: Unless you have the grace of a world-class ballerina, riding a "hoverboard" could be a completely humiliating experience. Check out Bieber's famous ride:

Ouch. Even Kendall Jenner, an actual runway model, can't get the hang of it:

And to think I have enough trouble with my roller skates.