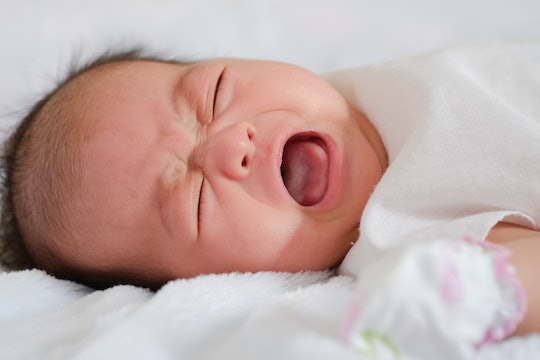 Amazon confirmed Wednesday that it removed circumcision training kits from sale on its U.K. website following complaints that the e-commerce conglomerate normalized the risky practice, according to The Guardian. ESP, a third-party retailer, was selling the Life/form circumcision training kits, which included a practice dummy of a boy's genitals, prosthetic foreskin replacements, instructions and some scissors and scalpels, all of which retailed at between $490 and $612. Romper was unable to contact ESP or a representative.

Mayo Clinic defines male circumcision as the surgical removal of the skin covering the tip of the penis. And, according to Quartz, most Americans assume the practice is much like a vaccine and thus medically useful. A 2015 study critiquing The U.S. Centers for Disease Control and Prevention (CDC) guidelines suggests that the CDC also argues that the benefits of circumcision (a reduced risk for HIV, urinary-tract infections and penile cancer) outweigh the risks. But UTIs and penile cancer aren't common among men, and studies done on the correlation to HIV are largely unfounded with missing variables.

Amazon UK therefore made the DIY kits unavailable after being urged to do so in a letter from the National Secular Society (NSS), The Guardian reported. Chair of the NSS's secular medical forum Dr. Antony Lempert reportedly wrote that non-therapeutic circumcision is "unethical and unnecessary" and the practice could be encouraged by the "morally negligent sale" of these kits that are putting infant boys at potentially fatal risks. He added:

Male circumcision in the UK is wholly unregulated and we fear that the sale of this product may encourage unqualified practitioners to carry out unnecessary surgery on infants in non-clinical conditions, resulting in serious harm.

He also reportedly argued that no medical association in the world actively recommends routine infant male circumcision for health reasons, so some of these products could be falsely advertising.

The letter warned that a complaint to the UK Advertising Standards Agency could follow about the health benefits of circumcision if Amazon didn't take action, according to The Independent.

Manoj Shenoy, president of the British Association of Paediatric Urologists, also told The Independent that the training kits "are not medically appropriate" and he raised concerns that they'd increase unregulated circumcision. Medical groups agreed that health justifications for circumcision in boys under 5 are rare.

Meanwhile, similar kits remain for sale by Nasco on Amazon’s US site. Two Life/form models with six glans and prosthetic foreskin replacements sell for $192 and $196. Nasco has not yet responded to Romper's request for comment. And Amazon declined to comment at Romper’s request regarding why it is still selling the kids in the United States.

And U.S. consumers are seemingly disconcerted, too. Commenters have written, "Unfortunately the loss of morality is not included in this kit," and "The only way this could be more disgusting is if it came with realistic screaming sound effects."

"Manufactured with care by Nasco in the United States, this Infant Circumcision Trainer, White is an excellent addition to your classroom!" reads one product description. Another product description details its intentions to help medical students, physicians and other practitioners learn and practice things like simulating dorsal block injection, separating the inner lining of the foreskin (preputial epithelium) from its attachment to the glans, surgical removal of the foreskin and suturing techniques. And because there are different methods of circumcision — Mogen clamp method, Guillotine clamp method, Gomco clamp method, Plastibell method, dorsal slit method, forceps-guided method and sleeve circumcision — the Life/form Circumcision Trainers have been designed for 'em all.

These trainers were developed with "assistance from one of the top medical schools in Wisconsin, as well as medical professionals in South Africa and Indonesia," according to the product descriptions.

Around 48,000 circumcisions took place in South Africa in 2015, mostly in the Cape, the country's poorest province, according to The Week. It's often performed in unsanctioned and unsanitary facilities, which can lead to infection or death. According to Quartz, as many as 46 of those who underwent the procedure died in the Eastern Cape in the 2015-2016 season alone, as circumcision “leads to dozens of South African men’s deaths each year — many from dehydration or septicemia."

In Indonesia, young Muslim men must be circumcised before puberty in accordance with tradition, Xinhua (official press agency of the People's Republic of China) reported. Indonesia has the largest population of Muslims in the world, according to Vice, so it's home to influential missionary organizations that keep Islamic tradition alive by sponsoring community events such as mass circumcisions.

A series of striking photographs of hundreds of young boys in Kabanjahe, North Sumatra was published in 2015 — they were treated as part of a free mass circumcision for refugees who were forced to move after volcanic eruptions at Mount Sinabung throughout 2014, and the photographs reveal raw emotions that aren't easy on the eyes.

While the prevalence across the States is dropping by about one percent each year, with more than one million procedures each year happening every 30 seconds, three-quarters of American men are circumcised, according to Made Man.

It's still currently legal in every state, and about 60 percent of all newborns in the country are circumcised, according to Legal Match. In fact, circumcision is so pervasive in this country that one study of 90 active American medical textbooks and models even found that less than one-third featured a penis with foreskin intact.

In 2012, the Germans ruled to ban circumcision, according to the BBC. In May, The Independent announced that Norway voted to ban the ritual circumcision of boys under the age of 16. The practice has also fallen by the wayside in Australia, Canada, Britain and New Zealand, according to Quartz, and the Washington Post reported that fewer than one-fifth of all male Europeans are circumcised.

Meanwhile, Denmark defended circumcision as a human right in 2016, despite the fact that 90 percent of Danes don't support it, Business Insider reported.

Fortunately, Amazon UK's decision could mean that evermore people are beginning to recognize the risks involved with male circumcision and speaking up loudly enough to create change.