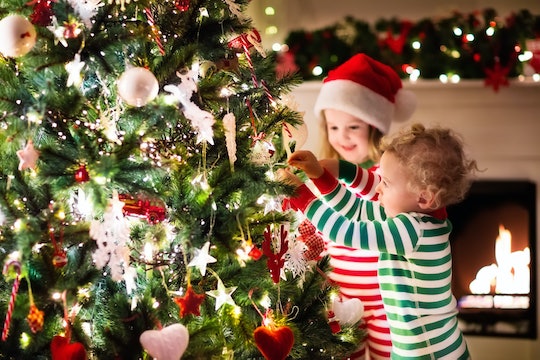 Dust Off Your Ornaments, Because Amazon Will Deliver Real Christmas Trees Right To Your Door

Ahead of the 2018 holiday season (is anyone else freaked out that it's only months away, or is just me?), Amazon released an important announcement this week regarding Christmas trees. In a surprising twist, Amazon will deliver real Christmas trees to your door starting in November, the Associated Press reported. The plan sure sounds convenient for busy families and those who can't get out to shop for one themselves, but how exactly will Amazon employees lug 7-foot trees around the United States? So many questions, right?

Just when you thought you could buy literally anything and everything from Amazon, the massive retailer decided to up the ante by offering its customers full-size Fraser Firs, Balsam Firs, Black Hills Spruces, and Norfolk Island Pines for Christmas season, according to CNN Money. The move comes one holiday season after the company sold 3-foot trees to consumers, an endeavor that was a big success. “Given the popularity among customers, we increased the assortment,” Amazon said in a statement about why it decided to include 7-foot trees for the 2018 holiday season, according to The New York Times.

Well, I suppose you got to give the people what they want. And if you're one of Amazon's customers who is amped about this festive development, here's how you can get a real tree delivered to your door.

Less eager customers can order their 7-foot trees sometime in November, and they'll have the chance to choose between a Fraser Fir, Balsam Fir, Black Hills Spruce, or Norfolk Island Pine. As of yet, Amazon didn't specify whether members will get the opportunity to pick out their individual tree, but I'd imagine the company will send you a tree at random — it seems too complicated otherwise.

Once you select your type of tree, Amazon will ship it in a large box — without water — right to your door. Amazon claims trees will be sent within 10 days or less of being cut down, and the company is confident there won't be any freshness issues despite the lack of water, according to Gothamist.

As for what this will cost you, Amazon provided some insight in its holiday preview book. A "7-foot Fraser fir from a North Carolina farm will cost $115," according to CNBC, while a decorative wreath goes for $50. The average Christmas tree retails for about $74, according TIME, so it looks like customers will pay a little extra for the convenience factor.

Oh, and if you're worried about the cost of shipping, sign up for Amazon Prime because some trees will be eligible for the membership's free shipping option, according to Mashable. Talk about a win-win.

Of course, some aren't totally on-board with Amazon's plan for the holidays despite its convenience. Some people argued the idea takes away from the magic of picking out a tree in person, while others complained that Amazon is seemingly taking over the world.

"Amazon is now selling Christmas trees? Is there any (legal) thing it doesn't sell?" one Twitter user asked.

It seems that this idea isn't for everyone. But if you're super busy this year and don't feel like trekking over to your local Christmas tree lot, you might want to give this convenient business idea a shot.