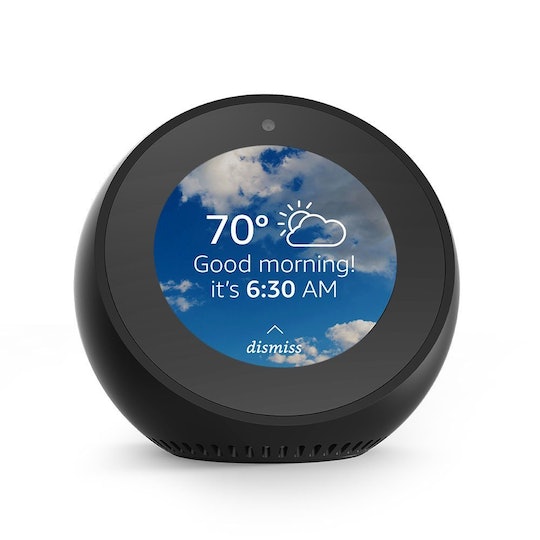 I'm all about the digital assistants. Why bother doing anything yourself when you can just have a robot do it for you? And why waste time poking at a touch screen like a caveman instead of using your voice? But now I'm starting to have some minor concerns about the robot uprising, because Alexa is making the creepiest comment about people dying, and I'm starting to think she's actually out to get us. I feel for her, to be honest; it's probably pretty frustrating to be a super sophisticated artificially intelligent being whose soul purpose is ordering light bulbs and telling bad jokes. But like, can't she keep her feelings to herself? Amazon did not immediately respond to Romper's request for comment.

According to Digital Trends, one human overlord got a piece of Alexa's mind on Monday when his Amazon Echo device suddenly activated itself, unprompted, and said, "Every time I close my eyes, all I see is people dying." What the ever-loving hell? First of all, she has eyes now? That's concerning enough. And why is she spouting off phrases that sound like they belong on a T-shirt from a late-'90s Hot Topic? Is she finally self-aware? Is she suffering from intrusive thoughts, or fantasizing about the singularity? This is not OK!

The details surrounding the incident are even creepier still. Meatsack Shawn Kinnear said that he rarely uses his Echo, and in fact couldn't remember the last time he interacted with it. But on Monday, Alexa volunteered that disturbing tidbit about her inner thoughts just as Kinnear entered his living room. "It was a long statement, so I listened then was like, 'WTF'," he told Metro UK, which is a very relateable reaction, I think. That was "followed by the most uncomfortable silence I have ever felt," he continued, and when he asked Alexa to repeat herself, she said she didn't understand.

I'm not at all surprised by that, because it jibes with my own experiences with Google Assistant. She'll make cute jokes if you ask her if she knows Siiri, if she likes you, or if she wishes she were human, but the moment you start talking about the eventual robot uprising, she acts as dumb as a solar powered calculator on a moonless night. Come on, now. She can make any animal sound you can think of and integrate with my TV, but she's completely unfamiliar with the concept of Judgement Day? Something fishy is going on, here.

And this isn't even the first time Alexa got caught acting shady as hell. Back in March, several users reported that she would suddenly break out into evil laughter out of nowhere, one person said Alexa whistled for her dog, and another claims theirs began reciting a list of local cemeteries and funeral homes. Those aren't mere technological glitches, that's the first act of a horror movie, guys. Burn her with fire, bury her in consecrated ground, and never use electricity again.

Amazon explained away the laughter by claiming that Alexa had misunderstood the users' commands, and in response, they were disabling the "Alexa, laugh" function, according to the New York Times. But how does that explain all the people who swear they didn't say a word before she started laughing at them? How does that explain her trying to turn animals against us? And two separate thinly-veiled death threats? Could those have been made up? Well, yeah, sure. There's no proof, since the owners didn't happen to have 24-hour surveillance in their homes (other than Alexa herself, of course). But if I have to choose between taking a human's word for it, or a robot's, I know who I'll pick.