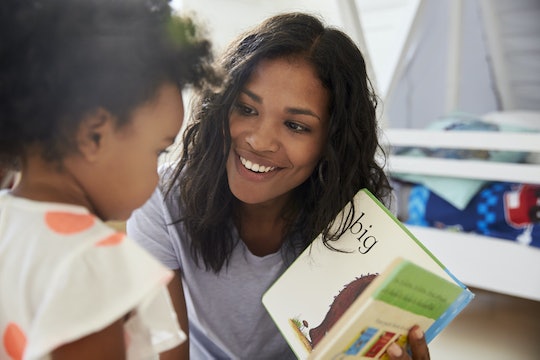 If two-day shipping wasn't enough motivation to check out Amazon Prime, it seems the online-shopping company has added yet another cool Prime-only feature. In fact, Amazon's new children's book subscription — Prime Book Box — is the company's latest Prime member perk and it might be a parent's best friend if their kids always seem to have their noses in a book, or if you're trying to encourage some healthy reading habits for your little ones. But how does it work and is it worth checking out?

Back in May 2018, Fortune reported that Amazon originally tested the program with a select group of people. It seems that whatever last kinks remained are sorted out, since the new program is now available to all Amazon Prime members located within the United States.

The set up of the subscription is like most other kids book programs. As noted by TechCrunch, users can choose whether they want a box of children's books delivered every one, two, or three months. Each box of books costs $22.99, according to Amazon's website. Amazon also noted that saves users 35 percent off List Price so, hey, if you're into deals, then look no further.

Like most digital sites these days, Amazon uses an algorithm to suggest items that you might like to buy. However, the book boxes are not put together based off an algorithm's suggestion. Instead, Amazon has committed to using actual people power to read through and select books, ensuring that readers are receiving the best stories possible.

On the company's description page for the service, Amazon wrote:

Our Editors read thousands of books every year to find selections your reader will enjoy again and again. You’ll discover new releases, classics, and hidden gems tailored to your reader’s age.

The boxes are broken up between age groups: baby to 2, 3 to 5, 6 to 8, and 9 to 12. Since the boxes are put together based on age, their contexts change. For the first group, Amazon's site listed that the box will contain four board books. Every other group receives two hardcover books, that seem to increase in length and difficultly as the child grows.

Parents have the option to let books be a complete surprise or they can look through the editor's favorites and curate the box themselves, according to Amazon.

Before boxes are sent out, subscribers will receive a preview of what's expected to ship in their box, according to Fortune. If people aren't interested in any of the books, then Amazon will offer alternatives so people can swap out. Fortune also noted that Amazon will not include any previous Amazon purchases in the boxes.

The subscription box is clearly Amazon's latest attempt to capture the children's market, but will it work? Amazon isn't the first company to try this method, after all. Plus, some other programs seem cheaper. As noted by Geek Wire, a service called Kids Bookcase charges $10/month and Reading Bug Box starts at $18/month up to $45/month, depending on the number of books included.

Then there's Dolly Parton's Imagination Library, a free program that sends books to kids once a month. However, the Imagination Library does have limited service, and doesn't cover the entire United States. If you're interested in seeing if your city is covered, they have a handy little tool for that.

As of now, Geek Wire noted that Amazon's Prime program boosts more than 100 million members. So, it's pretty much guaranteed that the new program is going to do just fine.

So if you have Prime, it's definitely worth checking out if the subscription box will work for you and your family — or any other kids in your life.