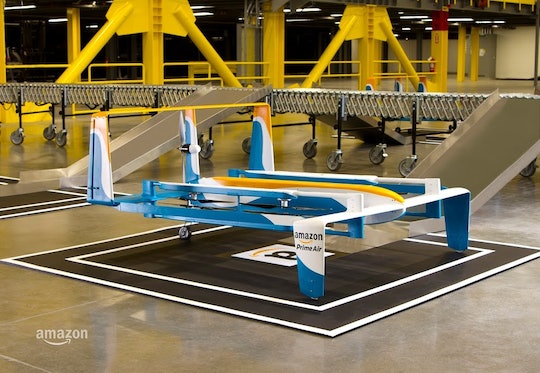 On Sunday, Amazon revealed the Prime Air drone prototype, an unmanned device that can reach up to 400 feet and fly up to 15 miles. The drones weigh 55 pounds and can carry up to five, and according to Amazon, they use "sense and deploy" technology to avoid any airborne objects — be it hot air balloons, aircraft, or pigeons. Prime Air development centers are already set up in the United Kingdom, the United States, and Israel.

While Amazon has kept mum on when Prime Air drone service will be available (sorry Cyber Monday shoppers), the company seems committed to releasing the service as soon as all safety concerns have been addressed. Amazon also claims to already have a dozen Prime Air drones created, and the ad makes it seem like these drones will be able to locate "landing pads" that consumers can lay down in their yards to receive products. (I can already see my brother attempting to catch the drone to dismantle and study.)

Do you realize what this means? I'm going to be spending a lot more money, to start with. Whether I'm drunkenly craving mass quantities of vegan jerky or I can't find the right pair of shoes last-minute for my job interview, it's going to be way too easy to order things from Amazon.

Take a look at Amazon's clever drone trailer — featuring one of my favorite gear heads, Jeremy Clarkson — below.

There are potential problems with the drone project: namely, privacy concerns as drones fly overhead. Most people seem excited about the possibility of a 30-minute warehouse-to-door delivery time, but not everyone is stoked — or believes it's possible.

I'll just be over here, waiting for the day when I can order in my vegan jerky and sate my last-minute interview clothing needs. Don't mind me.