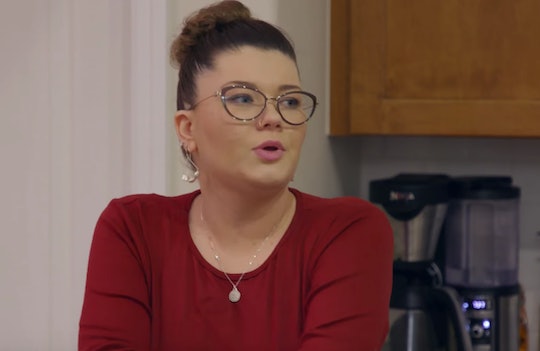 Before welcoming James into the world last month with her boyfriend, Andrew Glennon, according to In Touch Weekly, Portwood was just an average 28-year-old mother to a 9-year-old daughter — and just so happened to have her journey taped for TV. By allowing TV cameras into her home to capture the highs and lows of parenting, Portwood made herself super vulnerable and opened herself up to criticism from viewers at home, which was understandably hard. But now that she has nine years of experience in the bag, Portwood told Us Weekly that giving birth to James was like a fresh start for her, especially since she had no idea what she was doing when she first gave birth to her daughter.

"I was clueless," Portwood told Us Weekly. "I didn't want to ask questions because I didn't want to sound young or stupid...this is a chance for me to really show what kind of mother I am."

Portwood continued, telling Us Weekly that having a son gave her a renewed sense of purpose — not only as a mother but for her own health, too. Portwood said, according to Us Weekly:

Before, I wasn't mature nor was the relationship right. I want to make sure that I don't fall into old patterns and get into a depressed state. I have to take care of myself. Healthy mommy, healthy baby.

Since being on Teen Mom OG, Portwood hasn't been afraid to hide things from her fans and viewers of the show, especially her struggle with depression, which she first talked about in 2016, according to E! News. In an interview with Cosmopolitan that year, Portwood talked about what depression was like for her:

My life stops when I'm depressed because there's no getting out of it. There's no shaking it off because it's a chemical imbalance. When I get depressed, my depression is laying in bed not moving not even wanting to take a shower.

Once she became pregnant with James, the depression didn't go away. And in April, Portwood maintained her honesty about her depression while she was pregnant, telling People that she was talking to her doctors to "nip it in the bud" before she gave birth and experienced postpartum depression. "Everything is just kind of looking up," Portwood told People at the time.

And things have started looking up. In the past month since giving birth, Portwood has shared adorable photos of her son on Instagram and is clearly so happy to have this fresh start. Portwood herself is aware of how this pregnancy has been different for her, especially as a mother. "I'm more driven and have the means to take care of the baby better," Portwood told Us Weekly.

While some people might have had the same trajectory as Portwood, they didn't have TV cameras documenting it. Throughout this whole time, people have been there to witness all of Portwood's highs and lows — between celebrating her daughter to fighting with her exes. Watching how far Portwood has come — from a teen mom to a mother of two with a new lease on life — is so inspiring.