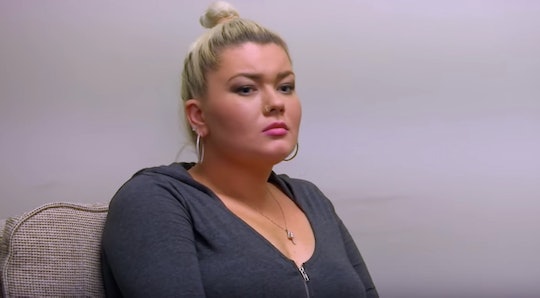 In November, Teen Mom OG star Amber Portwood announced that she's expecting her second child. Portwood, who already has a 9-year-old daughter with her ex-boyfriend, Gary Shirley, will welcome a son with her current boyfriend, Andrew Glennon, in May, according to Instagram. Although Portwood is incredibly excited to be a mom again, many Teen Mom OG fans aren't thrilled about the news. And because Portwood's followers haven't been so supportive about the pregnancy, she hasn't shared many details about her latest addition. On Monday, however, Portwood tested the waters again when she shared a rare photo of her pregnancy to Instagram. Sadly, many people are shaming Amber Portwood's new bump pic, and the comments are *beyond* frustrating.

It's no secret that Portwood has had a rough go of it in life. After Portwood gave birth to her daughter, Leah, at age 18, she struggled with drug addiction and legal issues. Following a stint in jail, Shirley won primary custody of Leah and the custody battle took a major toll on her mental health. As some fans might already know, Portwood grapples with depression, anxiety, and bipolar disorder. The good news is Portwood's life took a positive turn when she met Glennon, who she described as "uplifting," in the summer of 2017, according to PEOPLE. And just a few months after Portwood met Glennon, she learned that she was pregnant.

Although the pregnancy wasn't planned, Portwood was thrilled about the news. Portwood said in her pregnancy announcement, according to E! Online:

Thank you everyone for all the kind words. I'm very excited for my future with Andrew and our little family we are starting together! Love.

And on Monday, Portwood attempted to share her excitement with fans.

"Heading to my doctor for a check up! Can't wait to share my little bundle of joy with you all," Portwood captioned a shot of her bump, according to Instagram. "Sending love always."

Following Portwood's upbeat message, many fans took to the post's comments section to shame her parenting and supposed abandonment of Leah.

"I hope this baby snaps you back to reality and that you are a good mom to both it AND Leah-you have a lot of making up to do," one fan said. Another person chimed in: "You can't make excuses everyday about not being able to take care of this baby like you Leah you're stuck like Chuck girl! Get those feeling in check." "I wonder if she’ll abandon this baby like she did Leah," someone else said.

Of course, it's pretty upsetting that fans are trying to damper what should be an exciting time in Portwood's life. It's clear that Portwood is psyched to be a mom again, and that should be the only thing that matters right now. Not to mention, it's not OK for people to make assumptions about Portwood's parenting abilities or about what kind of mom she'll be like to baby number two. At the end of the day, the only person who knows what's going on with Portwood is Portwood herself. More often than not, reality television isn't a true reflection of actual reality. The truth is, these online strangers don't know Portwood and her relationship with Leah.

It's also worth pointing out that Portwood has had almost 10 years to grow and mature between pregnancies. It's reasonable to assume that Portwood has learned from her mistakes, just like any other parent who didn't get it exactly right the first time. And is there any parent out there who can say they totally nailed it with their first kid? Parenting, like anything else in life, is a learning process.

Most importantly, Portwood is happy. Portwood said in a November interview, according to Us Weekly:

When I first found out, I was a little scared. I just kind of sat down and thought about it and realized that it was a big step in my life and it was a good thing actually, and I was really happy within 30 minutes.After the initial shock. it was nothing but happy thoughts and just enjoying my time with my boyfriend. We're both very happy.

It goes without saying that happiness is paramount to Portwood's success as mom. The happier Portwood is, the happier her two kids will be. Portwood's naysayers should probably keep this in mind the next time they think about leaving a negative comment on one of her posts.