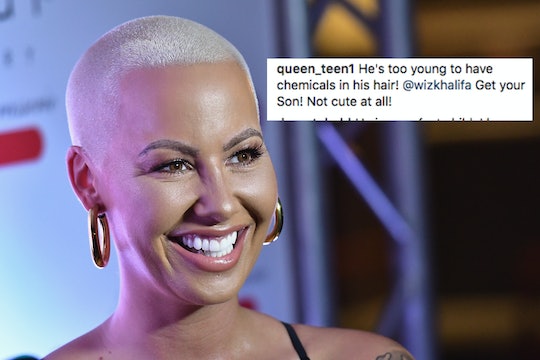 Listen, no matter what anyone says, being a mom is hard these days. And being a mom in the public eye presents a whole new set of challenges. Just ask Kristen Bell, Chrissy Teigen, or Amber Rose. That's right, Amber Rose dyed her son's hair to look like hers, and internet trolls are all over her for it. Because ya know, obviously they know better than she does what's best for her own son.

The 34-year-old actress and model is also mother to Sebastian Taylor Thomaz, who she shares with her ex, Wiz Khalifa. 4-year-old Sebastian is obviously just a kid, but that doesn't mean that when Rose shared a sweet photo of him rocking some platinum blonde hair just like his mom's, the internet didn't have something to say about it. After all, when does the internet not have something to say about women or mothers or celebrities.

Nevertheless, Rose shared a sweet photo of young Sebastian Sunday afternoon, in honor of his upcoming birthday.And while Rose explained that he had been wanting to become blonde like his mom for a while, that didn't stop plenty of haters from lashing out and leaving unnecessary comments on her page. Some people really do just have too much time on their hands, don't they?

First of all, the photo of Sebastian is seriously adorable, so I personally don't get why people are so upset, but whatever. Rose captioned the photo:

Lol he begged me for a whole year to dye his hair blonde like mine so we started with a little patch and I told him when he turns 5 I will make him a full blonde like his mommy. He will be 5 on the 21st of February! He’s so happy and none of you dirty little trolls can take that away from him or me!

Clearly, based on her caption, Rose was expecting there to be some trolls who condemned her dying her son's hair. Nevertheless, she seemed to think that Sebastian looked cute and happy, so she uploaded the pic. And good for her. At the end of her caption, Rose concluded, " P.S Love your children unconditionally and let them be creative this world will be a better place." Really, it's a pretty happy and uplifting post. But, ya know, the internet just couldn't let her have that happy moment now, could they?

Seriously, some of the comments on Rose's Instagram of her son's new hairdo were just nasty. "If he was hanging around his dad hell be asking for dreads he's a child pls don't turn this boy into a drag queen just cause he wants to be just like his mommy a boy can't do everything a girl can," one user wrote. Another added, "If i was his father i will be furious thats all i gotta say."

Of course, there were also a lot of users who attacked Rose in a far more simplistic way. "Stupid mom," one person wrote, with another adding, "Pray he doesn't have any allergic reactions nobody is any dirtier than you are." I mean, come on you guys, why is that necessary?

Seriously, at the end of the day, Amber Rose is just a mom and a human, at she doesn't deserve to have to see comments like, "Somebody need to save this child from la Madre," on her page.

Fortunately, plenty of commenters saw that little Sebastian looked happy and healthy, and that's all that matters.

At the end of the day, a child's safety is important, but from the looks of the photo, Sebastian is a safe, happy, and healthy kid. Can't ask for more than that, can you?