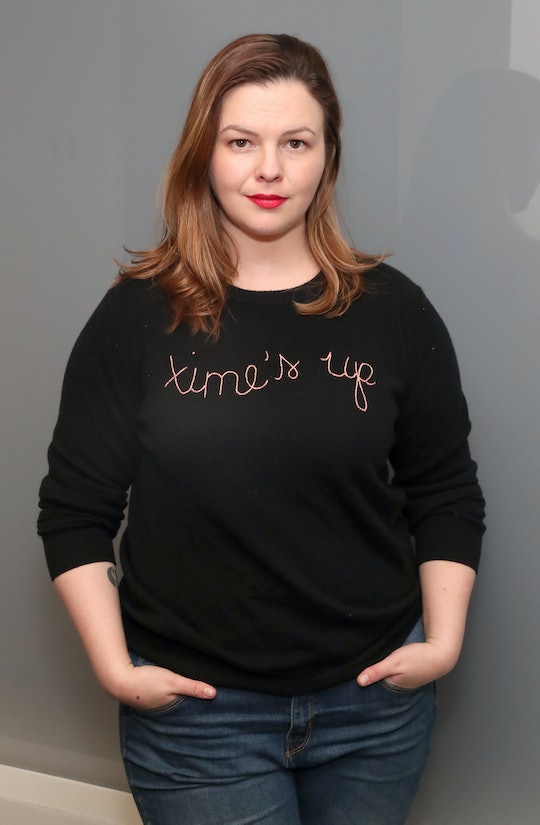 Amber Tamblyn Explains Why We Mom-Shame

"Having a child and becoming a mother weaponized me, it changed me on a fundamental level," says writer, director, actor, and triple Taurus Amber Tamblyn. "It changed all the gut-level instincts... and propelled them into action, no matter the consequences." Tamblyn is speaking at the Mom 2.0 Summit ("Mom2" if you're cool) in Austin, Texas, as the morning keynote, and taking action is somewhat of a theme. "It took a long time for me to feel like I was going to be able to be the mother I knew I was capable of becoming," she said of the work she had to do on herself.

Tamblyn is best-known of-late as one of the founders of the Time's Up movement, after a series of tweets about the actor James Woods churned up enormous attention in 2017 and pushed Tamblyn to the helm of a fledgling movement among industry insiders in Los Angeles (it soon spread to include farmworkers, restaurant workers, and other working women across the country). In March, she put out her fourth book, a memoir, Era Of Ignition, which unpacked her personal experiences recovering an identity after Hollywood, and issued a call for action. At the Mom 2.0 keynote "Be Internet Alert," presented by title sponsor Google, she spoke openly about her experiences as a woman, mother, and advocate, calling out mom-shaming, health care bias, challenges to women's reproductive rights, and white fragility to spontaneous applause.

"Now you have predominantly white women sitting down with women of color, and you're realizing what you understand as feminism is not meeting the standards," she said of the early moments of Time's Up. "Women were starting to have these really difficult conversations, and from that there were the most powerful bonds that I have come to know."

We're doing this [mom-shaming] because it's been projected onto us, so we are re-projecting it onto other women.

During the talk, Tamblyn discussed her inability to produce enough milk for her daughter Marlow in an effort to deconstruct the forces behind mom-shaming. "We're doing this [mom-shaming] because it's been projected onto us, so we are re-projecting it onto other women. That is what happens when you are in a container that was built inside a patriarchy. Mothers are allowed to be very few things, so when women speak to one another with that language, we're speaking the language of an oppressor."

As Tamblyn pointed out to nods from the audience, you don't need to be male to participate in patriarchal behaviors.

She welcomed a child with husband David Cross in early 2017, heralded by a well-played Instagram post that read "David and I are proud to announce the birth of our daughter, Dauphinoise Petunia Brittany Scheherazade Von Funkinstein Mustard Witch RBG Cross Tamblyn-Bey jr." (Her daughter's name is Marlow.)

She had been pregnant on election night 2016, when the Hillary Clinton 2020 watch party she was attending in Manhattan turned into a funeral scene. Tamblyn had campaigned for Clinton through two elections alongside friend and The Sisterhood of the Traveling Pants cast member America Ferreira, and felt the reverberations of the loss move through her daughter's future.

"I knew so much about the way women — and not just liberal women, but conservative women — have felt a form of suppression or oppression, whether that's in their personal life or professional life," she explained, "I was now seeing what would happen when I had a baby girl — that it could possibly happen to her."

Tamblyn's book discusses her difficult transition from child star to director, writer and poet in her own right, to gain agency over her body and life. Being paid to embody roles other people had written, she explains, left no room for her to figure out who she was. That's something she wants to change for her own child.

"What I want to mirror to my daughter is that I have an abundance of love and support, but that I’m my own independent person and I’ve forged my own way... I want her to forge an individual path for herself, like her mother."

Many moms in the crowd could relate to the necessary transformation that follows motherhood — any personal growth they couldn't squeeze in beforehand would have to happen as they worked to learn a new world. And new parents don't receive a lot of support as they go through this adjustment. As Tamblyn puts it, "We do not reserve a lot of space or respect for motherhood or parenthood."

What I want to mirror to my daughter is that I have an abundance of love and support, but that I’m my own independent person and I’ve forged my own way.

"I don't even know if I'm fully there yet," said Tamblyn. "I know I'm going to go back and have some sort of existential crisis to get there."

What hit about Tamblyn's message was that while it can be difficult to carve out time for yourself, or to prioritize yourself, women do have the ability to listen to and lift up each other. She urged those in attendance to speak frankly about their challenges, and recognize the ways in which a movement celebrating women can help everyone.

As she sat on the stage before hundreds of mothers, Tamblyn summed up everyone's feelings: "The most important thing any of us can do right now is tell the truth, and speak publicly and transparently about what's going on in our own communities and lives."

More Like This
Widows Are Expected To Mourn Forever — How Do I Date Again Without Shame?
Chelsea Clinton On Teaching Her Kids How To Embrace A New Sibling
This Is What It’s Like To Parent With OCD Right Now
Serena Williams Shares How Her Daughter Comforted Her After Losing A Big Match